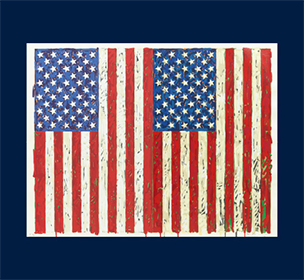 The American Dream: pop to the present

So where can you see a stunning survey of pretty much all the major artists, across all the major movements of modern and contemporary art, in the US over the last seven or so decades. The British Museum that’s where. I realise the element of surprise in my rhetoric may have been somewhat diluted by the titles above but you get the idea. This exhibition is focussed solely on printmaking, but given that has proved a vital medium for so many key artists over this period, and given that The British Museum has a few gems in this medium tucked away and begged gems from elsewhere, it means they can mount a humdinger.

It takes in the pop of Andy Warhol, Clas Oldenburg and Roy Lichtenstein, through the gods that are Jasper Johns, Jim Dine, Robert Rauschenberg, then iconic Ed Ruscha works, a bit of Bruce Nauman, some key Abstract Impressionists (not so much my cup of tea), marvellous pure Abstraction and Minimalism (Josef Albers, Donald Judd, Sol LeWit, Richard Serra), a dose of the photorealism of Chuck Close, Richard Estes and Alex Katz and then more contemporary works (many new to me with Kiki Smith the absolute stand-out).

Clearly as there is no paint or sculpture involved you only get a part of the story but prints are so immediately accessible and so easy to comprehend that you won’t feel the absence. There are maybe more straight lines here than with a survey through paint. But for me that is no bad thing as I like straight lines and it stops those loudmouthed later abstract impressionists taking over the whole shebang. Moreover the curators have smartly brought to the fore the key studios and collaborators who made the screen-printed works possible. Showing the techniques involved in the making of this art was, for this learner at least, a masterstroke.

If I had to single out just a few things for you attention, and to highlight why you should go along, then it would be Jasper Johns’s flags, alphabets and targets – just keep staring – Rauschenberg’s Stoned Moon series, 1969 and 1970 literally there in front of you, Jim Dine’s everyday curiosities, Ed Ruscha’s gas stations (you’ve seen the images before trust me) and his “droplet” prints (which I have wanted to see), Donald Judd’s squares and Sol LeWit’s lines and, as I say above, all of Kiki Smith’s works. I know I should try to be more critical but it’s tough to do so with something that has been as well put together as this exhibition.

There’s a lovely catalogue, a bargain at £15, if you wave your Art Pass you get in half-price, and remember the BM opens late on a Friday, so no jostling with bored students.

The British Museum boffins are on a roll. The South Africa exhibition prior to this was another smart piece of curating, Sicily last year was outstanding (my favourite exhibition of the year – and fortuitous preparation for an expedition to Palermo, Cefalu and Monreale en famille) and the Celts in 2015 put up a good fight too. Less enamoured of the Sunken Cities exhibition but still worth seeing.

There are only a few stand up comedians I would pay money to see (or even go for free for that matter). The vast majority of the observational comedy types off the telly cannot sustainably make me laugh or think over a couple of hours and I don’t put enough effort in to find out about the “lesser lights” of the comedy world. Moreover comedy is the one genre where I need a chum to go with, that’s the nature of this live experience. Finally I prioritise theatre, art and classical music performance over books, film, comedy, dance, opera and people chatting about stuff. There’s only so much time.

However, with Stewart Lee and Daniel Kitson at the cerebral, reflexive end of the spectrum and Tim Vine and Milton Jones at the punning end I have more than enough to keep me happy.

And Stewart Lee is by some way the funniest man alive or ever. It’s probably to do with content (same age, sameish world view), delivery (mocking, occasionally vicious) and technique (he is just really good at his job). In this year’s show he sets his sights for a tiny bit on Brexit and Trump (in a smart repeat), the value of his own material (I confess I probably laughed the most at the economics of his DVD sales – that’s the accountant in me), bondage in days gone by (historicism as a device to mock the youth in hyper-consumerist capitalism) and narcissism generally (always a target for scorn from those of us who deny or are embarrassed by our own attention seeking behaviours). Sometimes direct, sometimes in collusion with the audience (or parts thereof), always the deconstruction. Who else would use Caspar David Friedrich’s Wanderer to frame a show – a figure looking away from his apparent audience? Oh and the reference to a post-laughs show – brilliant.

The astounding thing is you kind of know what you are going to get in theory with Mr Lee but you go in completely blind to the practice (praxis?) of how it will be delivered. And he just keeps on toying with you even when you have see him enough times to be wary and to think you know what’s coming next. Much like The Fall I would say. His favourite band. And mine. Or like a comedy version of the Frankfurt School (look it up).

Oh and once or twice he genuinely laughed at his own jokes. Which was quite nice. Maybe he is starting to age gracefully. I hope not.

Anyway if you know then you will be going/have gone to see this. If you don’t then it is easy enough to find out if you will like him on t’internet. If you are tempted you will not regret it. The SO came along for the first time – “yes he was pretty funny” – trust me that is as ringing an endorsement as it is possible to get.

Next year’s show will also get five stars as will the year after that, and the show after that.