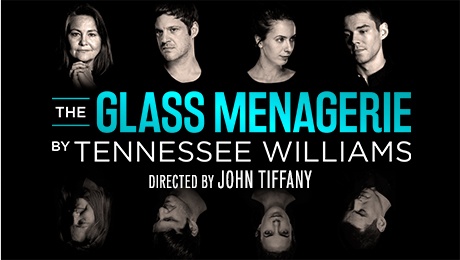 Sorry this is a bit late in the day but this is soldiering on until the end of April and is definitely worth seeing I think.

So obviously this is a classic American play from a classic American playwright and this production has been around for a little while now. It was Tennessee Williams’s breakthrough play and in my book more satisfying than the later classics (mind you I have only seen Streetcar Named Desire, Cat on a Hot Tin Roof and Sweet Bird of Youth so I am guessing I am not best placed to judge). It takes the form of a memory play with the protagonist Tom (TW himself- geddit) looking back to a time before he left the home he shared with his histrionic mother and delicate sister. That’s all you really need to know. TW’s writing is as crystal clear and so beautiful and the characters so perfectly described that it is really easy to sink into this.

The production itself is brilliantly lit with the main room of the apartment which the family shared surrounded by inky blackness revealing how their straightened financial circumstances and Laura’s (the sister) agoraphobia and limp have cut them off somewhat from the outside world. The score is also perfect (the chap responsible, Nico Muhly, is one of the best of the current crop of format hopping accessible modern composers). This combination of light and sound intensifies the “dreamy, half-remembered” nature of the events – memory after all is a construct which is imperfect and changes through time. There you go, a little bit of cod psychology for free.

Moreover John Tiffany’s production (he who is behind that Harry Potter play – never ever talk to me about Potter – and Black Watch, which along with the James Plays, is NT Scotland’s finest hour in my view), serves the text very well and is careful to draw out the broader social context (Tom has some monologues to this effect) in which the family find themselves. Actually if you do see this get round to the America After the Fall exhibition at the Royal Academy as well. This play also fits with the themes of optimism and fear which suffused 1930s America (and arguably 1970s America and America now) that the exhibition explores. That is the thing with TW – by looking inwards into the family/friends he shines a light on the wider world around them. And in a much more delicate way than the bang you over the head approach of Arthur Miller (mind you nothing wrong with Miller in my book). Just a thought.

As for the performances. Well Michael Esper as Tom very neatly takes on the heavy lifting that he needs to contextualise events and cleverly captures his ambivalence towards his dependent family and all his frustrations. Cherry Jones is a natural as mummy Amanda, the proper reviews can tell you all about her, and stays the right side of scenery chewing for me. But Kate O’Flynn as Laura is just outstanding. We like her on the telly – she has a face that perfectly reveals the internal machinations of the character – and though I was a bit too far away I felt every second of the excitement and subsequent crushing that followed the visit of the “gentleman caller”, Jim her high school secret crush, which is the pivotal scene. Just so moving.

Anyway time to stop being a gushing luvvie. This is a super play which is well served by this production. Simples.