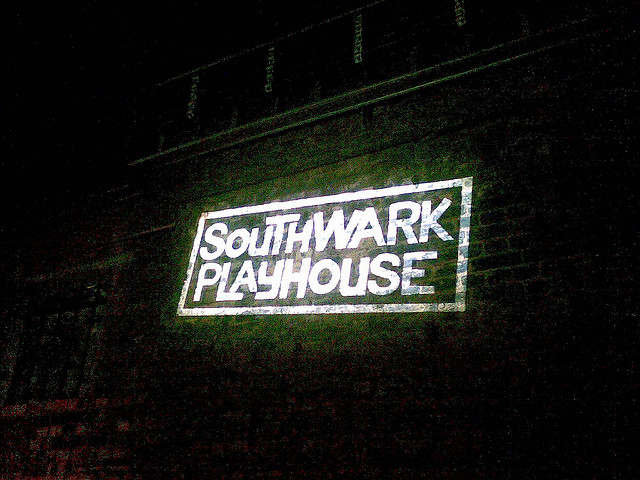 Let’s imagine you want to go to the theatre. To see a proper play. Let’s take the revival of Red for example at the Wyndham’s. 90 minutes straight through so not too taxing. Big name actor, Alfred Molina, in the lead. Michael Grandage directing. Very strong reviews just out. Best seats in the house? £120 in the middle of the stalls. Over £80 around that. Maybe if you wait they will come cheaper but who knows.

Par for the West End course now. Any alternative? Well yes as it happens.

For just £20, you could have ponied up to the Southwark Playhouse over the last three weeks or so (too late now – as usual I took too long to review this), plonked yourself in the front row and seen the gifted students of the NYT deliver some superb theatre, written for them, courtesy of two of this country’s finest playwrights. Dennis Kelly (DNA) was the writer behind Girls and Boys at the Royal Court which is off to New York with its dazzling lead Carey Mulligan (Girls and Boys at the Royal Court review *****), as well as Mathilda of course, and young James Fritz (The Fall) already has a string of prizes to his name, is cooking up something for the Hampstead Theatre and was the author of the vivid Parliament Square at the Bush (Parliament Square at the Bush Theatre review *****).

Mark me there were some superb actors at work for the performances I attended. In DNA Kitty Schneider as the taciturn, sociopathic Phil and, especially, Katie Ann Dolling as the garrulous Leah stood out. In The Fall I was particularly struck by the performances of Niyi Akin and Jesse Bateson and Troy Richards and Sophie Couch as the two couples. But honestly the acting of the entire ensemble in both plays was as good as, if not better, than most of what I see in major London theatres by established professionals. No fear. That’s the difference. And I am not being patronising or making allowances for these young’uns.

DNA, from 2007 and now a core GCSE text, follows a gang of teenagers after an “accident” that leads to the death of one of their members, Adam. They cover up to escape any consequences of their bullying, with Phil taking the lead. There is a twist or two. The way in which the play explores peer pressure and group dynamics, the need to belong and the effects of guilt Raskolnikov-style, in a not entirely naturalistic way, is fascinating. The relationship between Leah, painfully, and comically, self-aware as she desperately tries to impress an unresponsive Phil is particularly well-written.

The Fall explores the increasing divide between an older generation needing care but hoarding capital, and a younger generation who don’t see why they should be burdened and want the cash. Pretty topical huh. Mr Fritz is not a genteel writer, and wades in feet first with argument, humour and drama aplenty. Boy and Girl need somewhere to shag and end up in the house of the old, rich bloke that Girl helps care for. They discover, much to Boy’s disgust, he is lying in bed, close to death. One and Two’s relationship is charted from first meeting, through marriage, a child, poorly paid work, tiny rented flats, via a quick-fire exchange as they make and unmake the bed.linen. One’s Mum needs looking after, but what will happen to the flat she owns? In the final scene four old people, A.B,C and D, are holed up in a care home. They have a state sponsored option to die and release funds for their kids.

Like Parliament Square you might find the calculated structure of the play grating. Not me though. The energy, which the cast, complete with dance between scenes, revelled in, and the ambition, the play makes a lot of points in its 70 mins, bowled me over. As with DNA the performances were outstanding. I would love to see Mr Fritz re-write this from a reverse perspective, aged fear rather than millennial angst. Maybe when he is a bit older? That would be intriguing.

As an aside please do remember that the generational wealth gap which we are all banging on about, is as nothing compared to the class wealth gap. Knocking off the old early may not have the desired effect kids. Everyone will still suffer from plundering the earth willy-nilly and from voraciously conjuring up fictitious assets with fictitious debt pulled from the future. Still that’s Homo Sapiens for you. Exceptionalists prone to tantrums, unable to defer gratification.

The Fall was directed by Matt Harrison, DNA by Sean Hollands. Bravo chaps. I expect to see a lot more of their work in the future.

As I do from these talented actors. The major drama schools churn out beautiful actors from elite backgrounds. (I don’t use the term middle-class any more – it is meaningless). If my kids had any acting talent, and were not compromised by father having been hit by the ugly stick, despite their mothers’ beauty, they could be amongst them. But only because Dad was lucky to benefit from one of this country’s regular waves of capital expansion driven by financial intermediation. As I understand the NYT ethos though, access is not dependent on finance. So it is your duty to support it. I will remind you next time.