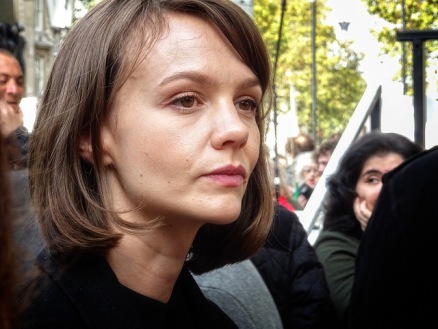 Flippin’eck. That Carey Mulligan can act. I had a fair idea from her turns on the telly and in films. She has an unerring knack of choosing roles in dramas that appeal to myself, the SO, and often both of us, in itself a rare skill. I have never seen her on stage though, having missed the 2015 revival of Skylight, (and been told I was a fool to do so), and her stint as Nina in the RC Seagull some years back, that being a dark period in my theatre-going career.

This is a revelation though. Dennis Kelly’s play, a 90 minute monologue which follows the relationship of an unnamed woman from first encounter to its brutal conclusion, provides plenty of material for her to get her teeth into, but even so, this is jaw-dropping stuff. You might reasonably arraign Mr Kelly’s story for being overly transparent and tendentious, but no matter, the points he makes about male psychology and its propensity to violence are valid even when spelled out this volubly. Ms Mulligan copes effortlessly with the shift from comedy to tragedy. We may guess the form of the tragedy fairly early on but it doesn’t make it any less gut-wrenching and Mr Kelly takes care to disclose ahead of the narrative curve to keep us involved.

The opening anecdote, when She first sees Him shame a couple of queue jumpers at an airport, is genuinely very funny. Carey Mulligan could successfully moonlight as a stand-up on the basis of this scene, impeccable timing and winning glances to the audience. The tone shifts through the recognisable description of the passionate early days of the relationship into marriage, domesticity and the birth and early years of children Leanne and Danny. She blags her way into a job as PA to a development executive’s assistant in documentary film-making, then sets up her own company, wins awards. His business meanwhile fails. He disintegrates.

The story is told through a mixture of “chats” which incorporate Her reflections on his male behaviour and identity, which betray more universal instruction, and “scenes” where She is looking after the two, imaginary kids. The play of the children declares there gender with Danny’s games always informed by violence. These scenes are played out in a contemporary interior lit entirely in pale blue in Es Devlin’s amazing set. We glimpse the true colours only very briefly in the switch from the chats, apart from one or two significantly highlighted objects. This device, together with the somewhat stilted, though still very convincing way that Carry Mulligan “interacts’ with the absent children, is ambitious and striking. It also offers an early clue as to where the drama is heading.

With an actor on this form I am tempted to suggest that the directing task for Lyndsey Turner was made easy. Not so. Mr Kelly’s text contains some remarkable language but the stark message and the “dualistic” structure required careful management to extract the full dramatic power, (and justify the tribute to Euripides), to avoid looking flat-footed.

I suspect that this may prove to be a play that finds it hard to outlive its first performer. We shall see. What I do know is that if Carey Mulligan steps on to the stage again, just go. Whatever she’s in and wherever it is.