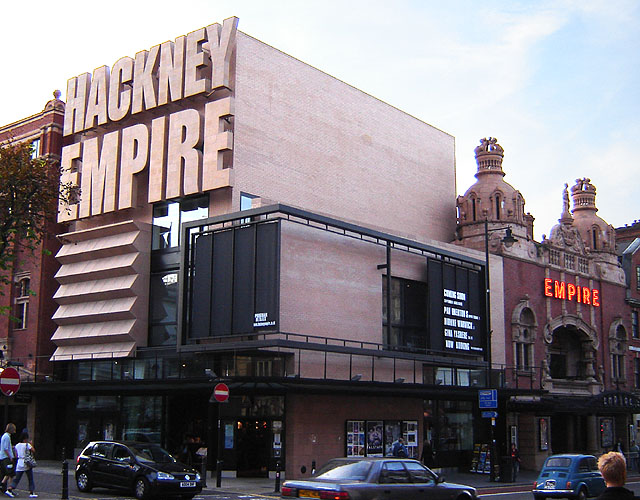 Working on the premise that it surely is impossible to see Hamlet too often in a lifetime, and keen to make sure the RSC continues to bring as many productions as possible to London, I signed up some time ago for this gig. This despite having already seen the cinema broadcast from Stratford in 2016. A bit excessive I hear you cry. Nope, not when you have an actor as gifted as Paapa Essiedu. His Edmund in the RSC King Lear in 2016 was the best thing about the production, which was pretty good despite some misgivings about the play and Antony Sher’s Lear. Hopefully you had a chance to see him on the tour of this production before it came to the venerable Empire. If you are anywhere near the Kennedy Centre, Washington (DC not Tyne and Wear) in early May I commend you to get along for the last leg of this tour.

There is more to this production, directed by Simon Godwin, than Mr Essiedu however. Mr Godwin has demonstrated that he has a way of breathing new life into classic texts, combining innovation and fealty. (Twelfth Night at the National Theatre review ****). Denmark has been re-imagined as a West African state which yields some interesting insights and a design concept for Elsinore a long way from the usual Northern European Stygian gloom. The programme notes, (I don’t know why people don’t buy programmes, at the very least at the major subsidised theatres, there is so much to learn from them), refer to Hamlet coming “home” after his years studying in Wurttemberg and how he is torn between cultures. There is some mileage in this idea which the production gently explores. There are parallels with Tshembe Matoseh, the main protagonist in Lorraine Hansberry’s masterpiece Les Blancs. No doubt you clever people can think of other theatrical “culture-clash” conceits. Of course transporting the look and the backdrop of the play to West Africa, whilst still retaining a text and characters anchored in Shakespeare’s vague Denmark, throws up a few contradictions but I think that was largely the point. Your man Hamlet after all isn’t short of cognitive dissonance.

So our sweet Prince is already on edge and suspicious of how Claudius came to power. When he sees Dad’s ghost on the ramparts all togged out in tribal chief paraphernalia, in contrast to the modern dress of the present Court, he quickly resolves to action. There is a sense throughout that this Hamlet, whilst not knowing how and when, and running through the gamut of hesitant self examination, is powered by the powerful urge to right a wrong. His feigned madness, his toying with Polonius, the verbal sparring with Horatio, Rosencrantz and Guildenstern, the taunting of Claudius and Gertrude, the carousing with the players, are all in the service of avenging the old fella. The production breaks at the Claudius prayer scene with Hamlet circling in the shadows, gun in hand. I wasn’t sure but I reckon this was only ever going to be a reprieve for Claudius. (Of course I was sure, we all know what happens, but my point is this was a Hamlet who was just gearing up to the main event not a bottler with an uncertain grip on his own reality). “To be or not to be” is a pep talk to self here, not a page from Kierkegaard.

Paapa Essiedu fits this conflicted, mischievous Hamlet like a glove. There is not one single word, let along line, that doesn’t sound entirely right. He doesn’t hang around or over-elaborate, but there is still enough space around the words to take them in. Not the conversational musing of Andrew Scott at the Almeida or the irked ironic philosophising of Benedict Cumberbatch at the Barbican. Just a spontaneous intelligence which makes you wonder why other actors seem to agonise over the right tone to take for this admittedly complicated young fella. His movement and expression is flawless. He can project a single glance to the back of the balcony. He seems to find the shifts from comedy to tragedy, well, just easy. Look out for the laugh he conjures up when pulling Polonius’s body from behind the arras. And I know it shouldn’t matter but it really helps that he is the right age and he is beautiful. PE himself seeming to be a combination of child, student, lover, playboy, artist, he knows enough to question what it is all about, but not enough to buckle under the weight of his own existentialist uncertainties. And, despite all the moping about and hissy fits, you can see why people are really drawn to him and crave his approval.

Compare this to Clarence Smith’s Claudius which is far more old-skool declamatory, though this works pretty well in this context. A far cry from the last time I saw this fine actor as the broken Selwyn in Roy Williams’s brilliant latest play The Firm (The Firm at the Hampstead Theatre review *****). I wasn’t entirely convinced initially by the versatile Lorna Brown’s seemingly withdrawn and inert Gertrude, but this made more sense as the production unfolded and the final death scene was very poignant. He’s still her little boy you see.

In the scenes between Polonius (Joseph Mydell), Laertes (Buom Tihngang) and Ophelia (Mimi Ndiweni) there was a real sense of a loving family, something I had not really felt before. Matching Papa Essiedu’s dazzling performance was a tall order for the rest of the cast but Mmi Ndiweni, (taking on the role from Natalie Simpson in the first Stratford incarnation), came pretty close. The mad scene was both very moving and very scary. Mind you I am a sucker for a distraught Ophelia. And, thanks to both actors, Hamlet’s dismissal of Ophelia, here played out whilst writhing around in bed, actually made sense. Romayne Andrews and Eleanor Wyld as Rosencrantz and Guildernstern struck all the right notes, dislocated in this very different Denmark, and Ewart James Walters turned in some scene stealers doubling as a booming Old Hamlet and a Gravedigger who, judging by his accent, had taken a long way round to get to this particular Denmark.

The production really comes to vibrant life when the colours, sounds and dance of West Africa are brought to the stage thanks to Paul Anderson (lighting), Sola Akingbola (composer), Christopher Shutt (sound) and Mbulelo Ndabeni. The players are no afterthought here. Locating Hamlet’s antic disposition in the artistic milieu of Jean-Michel Basquiat works far better on stage than on paper. You are left wondering if Simon Godwin and the team might have found a few more visual or textual signifiers to flesh out Claudius’s rise to, (diplomatic duplicity alongside an arranged murder?), and fall from, power, and the effect of conflict with the “Norwegian” neighbours, though I get this might have made for an uneasy narrative. It may have helped ease the shift into the bloody carnage of Act V though.

Anyway not quite a perfect Hamlet (play) if such a thing where ever possible. But certainly a near perfect Hamlet (bloke) thanks to Paapa Essiedu. I think I have been guilty of saying too often that I can’t wait to see what xxxx does next on stage in this blog. In this case it is really true and I suspect most of those who have seen this production would agree. On this evidence anything is possible from this rare talent. There are some actors who convince but stay firmly rooted to the stage behind the invisible wall. There are some though that seem to magically come off and out to play to you alone. PE is one of these.