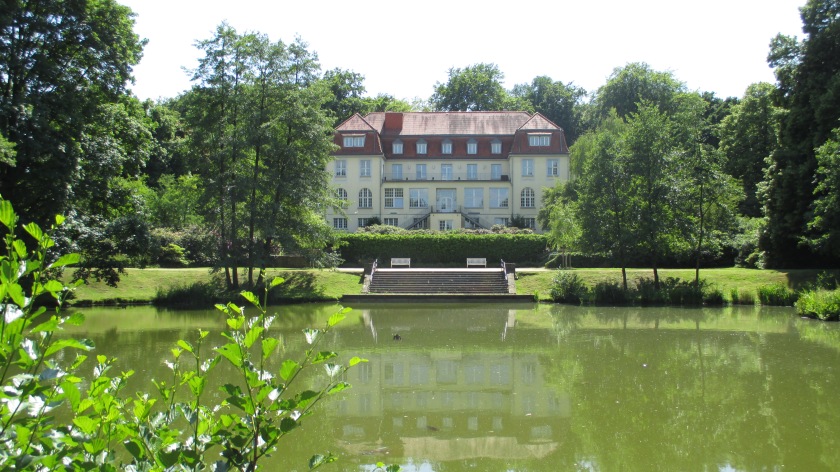 I have never seen Ibsen’s Peer Gynt before. In retrospect a minimalist two hander, a “daring realisation”, by “internationally acclaimed” German company Theater an der Ruhr, might have been a somewhat challenging place to start. Still what doesn’t kill you makes you stronger, or whatever the theatrical equivalent of that maxim happens to be.

And there was much of value to take away from this production. But let’s start with the play. Given that he was the “father of realism”, Peer Gynt is a bit of a departure. A sprawling fantasy in Danish verse about an oddball whose grip on reality is far from secure. It is based on a Norwegian fairy tale, though it contains echoes of HI’s own life, with family members written in. It has elements of a romance, like Will Shakespeare’s last outings with Pericles, The Tempest and Cymbeline, lightly concealed satire on Norwegian insularity, strikingly surreal scenes immediately contrasted with natural, contemporary drama. It tracks the life and, presumed death (it isn’t explicit) of our Peer across 40 scenes which utterly disregard the normal conventions of staged theatre. HI saw it as a lyric poem. I bet he would be surprised at just what a hold it has in the canon.

That’s probably the case because, I gather, there are so many ways for creatives to impose meaning on this “masterpiece”. In fact there is just so much “theatre” that can be thrown at this piece of theatre. Peer is a waster and a drunk early on but he can tell stories. There is a persistent, emotional, and maybe futile for Solvieg, love story. There are trolls, and a half human, half troll baby, always a crowd pleaser. There is much philosophising on the nature of existence and reality. there’s all manner of Freudian interpretation. Peer is the ultimate egotist. Who loves Mummy. There is a swipe at capitalism, laced with overt racism. There is a madhouse. A travelogue. A shipwreck. And, at the end, an overtly Christian reckoning and possible epiphany. He might have been dreaming. Or he might have been extravagantly alive.

So you can see HI packed it in. One way to present this is to assemble a wide cast and let the creative minds loose to do their best, or worst. I hope to see such a production. (I see the NT has commissioned a new, contemporary adaptation by David Hare for 2019. There is a man who can do sprawling). Every year in Vinstra in the middle of Norway they stage a giant production as part of the Peer Gynt festival, this being the place where the chap on which the character might be based hails from. Never been there but will add it to the bucket list along with Borgund Stave Church. I remember my first holiday, a cruise along the Norwegian coastline with 600 post pubescent teens on the SS Uganda. We saw Greig’s house, he of the Peer Gynt suites. And in today’s athomehefeelslikeatourist list of cultural coincidences it was Greig’s Holberg Suite that I had the pleasure of listening to last night.

Enough rambling. So I suppose the other, perhaps trickier way, to stage the play is like this. Minimal props, table. chairs, a bed, two actors dressed in the monochrome suits which spell Lutheran phlegm. With the actors, Roberto Ciulii and Maria Neumann, taking on all the parts, and even sharing the role of Peer himself.  Vital then to know your stuff so I was handsomely rewarded for boning up on the plot beforehand. I highly recommend this strategy for the classics. Here it was a life-saver. Well OK maybe that is an exaggeration, it was only 90 minutes after all. But it certainly made for a much clearer understanding as, whilst the plot is pretty much intact, the dialogue has been ruthlessly sharpened, and even more so in translation to sur-titles.

So I kind of worked out where we were, and what was going on. despite the limited display. Not sure everywhere in the audience was so lucky/prepared. You certainly cannot take your eyes off Roberto Ciulii, the Italian founder of Theater an der Ruhr with Helmut Schafer in 1981, and long time ensemble member Maria Neumann. They are mesmeric. Both are possessed of extraordinarily expressive faces, and Ms Neumann in particular is an amazingly physical and tactile presence. Major and minor changes in intonation and body shape indicate character changes. Dialogue, monologue and narrative intermingle. There are a few jokes. But the stripped back aesthetic, the small space, the absence of visual cues and distraction, together with the barrier of translation, however idiomatic Signor Cuilli’s text, can veer towards the monotonous. Not in a dull way. Just in a way that I suspect re-calibrates the dimensions of the play. Mind you this is what TadR sets out to do. A company that sets out to make theatre that can travel and abhors hierarchy. In a lovely looking building in a park in Mulheim near Duisberg (look see above).

The absence of spectacle does allow a focus on exactly how Peer’s identity is constructed. Is his life defined by what has happened to him, or what he has made happen? Is he, with all his obvious flaws, still to be admired, or is he just a bit of a knob? Is reality out there or just what goes on in our heads? See that’s what happens when you go to North London with other culturally aware trendies to watch modernist German theatre. If you are a real pseud, like someone here, you even buy a German programme for no apparent reason.

So a worthwhile journey for me. And for Peer. Whoever he was.