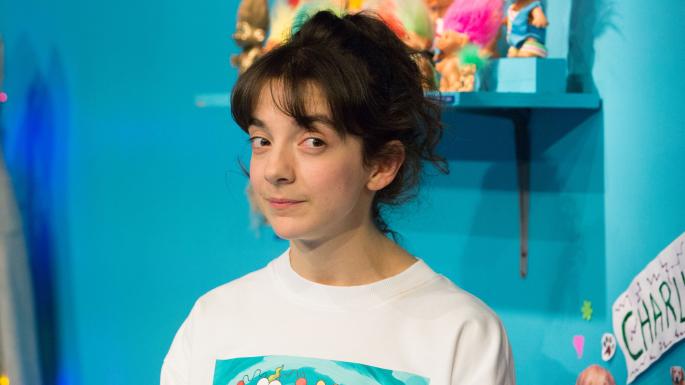 My Mum’s A Twat

I am a fat bloke with a dodgy heart and a sore back in his 50s. So I should not be swanning around London without a care in the world hoovering up culture to make up for lost time. I should be grinding away engaged in pointless labour for 12 hours a day to ensure late Western capitalism can continue to eke out basis points of economic growth. “Growth” that is only secured by measuring the wrong things or by mortgaging the future. But, in some unseemly regress to my student and early post student years, that, (the swanning), is what I am doing.

Which in turn means I end up seeing theatre where I am plainly not the target audience, surrounded by youngers who could be my kids, on seating which has not been designed with me in mind. There is an excellent tendency amongst the most progressive theatres, the Gate, the Young Vic, the Royal Court, in London to incorporate the audience seating into the set design. I probably had a lucky escape from The Jungle at the Young Vic recently, (no allusion intended), as I was unable to make the booked date. From the sound of it that was a cultural loss, given the sparkling reviews, but a medical gain as the chances of me sitting for an hour or so on a cushion without the entire audience sensing my discomfort was miniscule.

And so to My Mum’s a Twat where a quick scan on the way in saw me quickly bypass the floor cushions and opt for the sturdiest wooden chair I could find, which just about did the trick. Now to be absolutely clear I am not moaning about any of these design concepts. Quite the reverse. Bringing the audience in, rather than shutting it out, can only be a good thing. And, at the end of the day, if I could just lay off the pies, the discomfort could be dialled down. No, this is simply an awkward, space-filling preamble to the bland realisation that My Mum’s a Twat may not have been for me.

Which is galling in so many ways. The Girl in this 75 minute monologue was played by my favourite stage pixie, Patsy Ferran. By my calculations you could secure maybe 4 Patsys for every 1 of me. And since Patsy Ferran delivers more joy in 30 seconds of stage performance that I could muster across several lifetimes, (even learning from my mistakes), then this would be a very valuable trade. She was the stand-out actor in Polly Findlay’s As You Like at the National in 2015 and in Ms Findlay’s most recent RSC Merchant of Venice. And her turn in Blithe Spirit in the West End a few years ago near upstaged some way more venerable colleagues. I note she is set to take the lead in the Almeida’s forthcoming TW’s Summer and Smoke – can’t wait.

Anyway she was made for this part. This debut play by Anoushka Warden, (whose day job is schmoozing the press for the RC – good on her), is a forthright memoir of the Girl’s childhood after her Mum and partner join a ropey (“batshit crazy”) cult. She tells tales of her siblings, her stepdad (“Moron”), Mum obviously, (the twat), the pious cult leader (sorry can’t remember her name), her Dad, who she eventually rejoins after Mum and stepdad move to Canada to set up a new outpost of the cult, her friends, drugs, sex, music. In fact all the things you would expect from a memory play about childhood and teenage years. It is not too gentle though it is pretty funny, and it captures many of the pleasures, the disappointments, the self-absorption, the bedroom rebellion, of those years. At its heart lays the bond between the Girl and her Mum, despite the nonsense that her Mum subscribes to in the cult.

I wished it had gone a little bit darker, especially into the workings of the cult. The story would allow that, the anger is rooted, but Ms Warden’s writing defaults back to comedy. And it might have benefitted from a little more surprise and revelation along the way, especially towards the end, where it becomes a little bit “teenage rebel” predictable. It does though have moments of real insight and acuity which expand beyond the specific’s of the Girl’s story and it serves as a perfect vehicle to showcase Ms Ferran’s undoubted talents. Some actors recede from the memory post performance, some actors intensify. Patsy Ferran is one of the latter.

Seating aside, Chloe Lamford’s teenage bedroom design is a winner, and Ms Warden has secured the services of, not one, but two, of our finest directors in boss Vicky Featherstone and Jude Christian. Ms Christian directed Parliament Square at the Bush and in Bath (Parliament Square at the Bush Theatre review *****), to thrilling effect, and Bodies (Bodies at the Royal Court Theatre review ****) in this very space. Next up she will be bringing Trust to the Gate Theatre. A post-theatre, dance based German-Dutch collaboration having a pop at global capitalism, in the tiny Gate space. It will either be genius or ludicrous. Probably a bit of both.