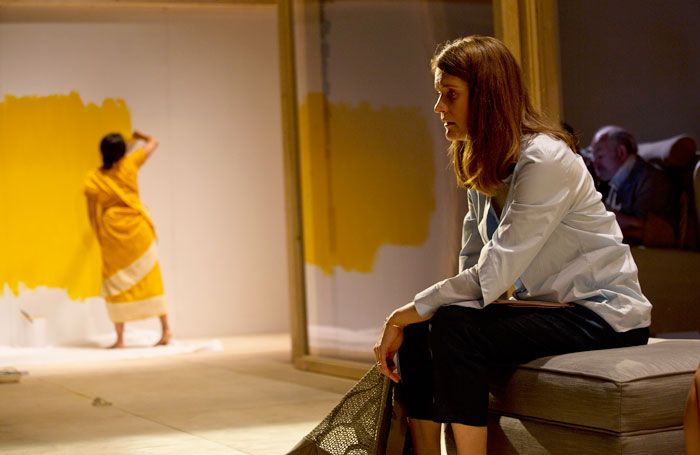 Bodies is my first exposure to the writing of Vivienne Franzmann and I hope it will not be my last. A few quibbles aside this is overall a thoughtful play which sympathetically explores the issues that it chooses to highlight.

Here’s the set up. Clem (Justine Mitchell) and Josh (Brian Ferguson) cannot have children naturally and have chosen to pay for a surrogate, Lakshmi (Salma Hoque), in India to carry “their” child (via eggs from a ‘mother” in Russia). Clem’s father, David (Philip Goldacre), has motor neurone disease and requires constant care delivered by Oni (Lorna Brown).

Clem’s desperation to have a child is manifest in the conversations she has with an imagined teenage Daughter (Hannah Rae). Justine Mitchell’s performance as Clem is finely drawn and never histrionic. I found the scenes with a confident Hannah Rae as the Daughter very effective, a pointed device to externalise Clem’s fears and wishes. Clem is determined to navigate her way with compassion through the moral maze she has constructed but slowly the threads unravel. Her proud father, very convincingly delivered by Philip Goldacre, is a union man, and thinks what she is doing is plain wrong. Josh the husband, whilst never admitting it to his liberal self, has a more acute sense of the transactional entitlement in their course of action. Oni, whose husband and child are back home, serves to wryly puncture the couple’s bubble and to remind Clem of her obligations to her father. Whilst the couple do initially travel to India to meet Lakshmi, (Selma Hoque’s lines are few and weighted to the end but powerfully conveyed) their “relationship” is mediated at long distance by the clinic’s head Dr Sharma (the voice of Manjinder Virk) which means the couple can accept a convenient pretence about Lakshmi’s situation.

Ms Franzmann is careful to offer a sympathetic take on each character’s actions whilst still very clearly revealing the human costs of “fertility tourism”. Indeed I see from a quick skim through the text that the more overt exposition from some characters has been cut which I think fits the tone of careful examination more effectively The play is an already economic 90 minutes or so but might even have been tighter given the intelligent construction of the scenes. It sometimes felt as if Ms Franzmann needed to underline her already effectively constructed dilemmas. There is no need – the delicate dialogue is consistently revealing. The set is also occasionally ungainly and there are some avian based metaphors which seem a little superfluous.

But these are such minor objections I feel impolite to mention them. This is very rewarding piece of theatre with fine performances and direction from Jude Christian, which is made more powerful in my view by its low-key tone. In fact it is turning into one of those plays which gently gnaws away in my conscience. Examining exploitation, at any scale, whilst still allowing sympathy, is an awkward undertaking. This is more than up to the task.

2 thoughts on “Bodies at the Royal Court Theatre review ****”