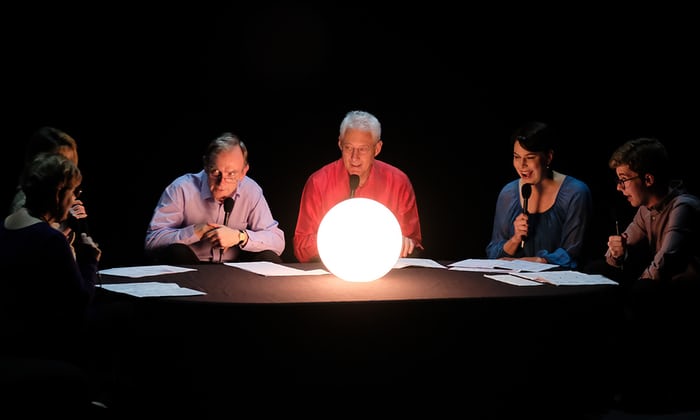 Right you had to be there OK. Stockhausen is the great big looming presence that hangs over the whole of modern classical music. A whole new way of thinking about music. A whole new sound world. Music as mathematics. Rigorously intellectual. A control freak whose vision extended well beyond this earth into our wider universe. A mystic. A teacher. An inspiration. Certainly bonkers.

That’s the myth anyway. I have never been brave enough to take the plunge on a recording or concert previously, figuring it was going to be well beyond me, and probably painful. Yet there comes a time in every man’s life, (well probably not yours I suspect), when he has to step up to the plate and take on the musical challenge. I would be willing to bet though that I was not the only one in the packed Barbican Hall who was new to this and approaching it with some trepidation. Seriously they can’t all have been Stockhausen devotees.

I was totally unprepared then for what followed. For this is actually a pleasant piece of music which, for me, turned out to be comparable with listening to the best of Renaissance vocal music. It takes a bit of getting used to the “pure harmonics” sound and the way that the six voices are used, and the text, with all its sexist, priapic boasting, and barking out of various gods’ names, is nonsense. But the sounds and patterns of the voices are fascinating and, at times, just beautiful. Like a motet, honestly.

Mr Stockhausen takes the high pitches that shadow every natural note, or fundamental as he termed it, and asks his singers, by shifting the position of tongue and lips, to draw out these high pitches and expose the “harmonics”. Starting with a low B flat he then takes five ascending notes and creates a new vocabulary of harmonics. From this he conjured up Stimmung. There are 51 different parts or “models”, with each male voice leading 9 of the parts and each female 8. The “lead” for each part waits for the rest of the ensemble to merge their previous material into their “lead”, to achieve “identity” in terms of tempo, rhythm and dynamic, and then, with a flick of the hand, passes on the “lead” to whoever comes next. This means the performance can vary depending on how long the “identities” take to emerge and in what order the “models” are taken. In 29 sections the “magic” god words ring out and there are some other recognisable words popping up elsewhere (“barber shop” being the funniest). All clear. Well the surprising thing is that the structure is clear, crystal clear.

I know it sounds daft. But it isn’t. It is captivating. Not much to look at mind you. Six people sat round an IKEA bubble lamp with microphones, (mind you it does look a bit retro 70s cool), gurning and sometimes waving. But it sounds divine. Literally.

Singcircle were founded in 1976 by Gregory Rose, who is still there. They have performed Stimmung over 50 times. It is clearly a tricky thing to pull off. This was the last ever performance so certainly poignant. Kathinka Pasveer, the sound projectionist, was one of Stockhausen’s leading acolytes and interpreters so no-one better to mix the whole. I think I heard a couple of electronic grunts along the way but who cares. You closed your eyes and just let the transcendent sounds swirl over, around and through you. Jeez I am travelling back in time to my long-hair days in the mid 70s.

Stimmung though was enough for me. I passed on the second piece, Cosmic Pulses, which came after the interval. No point pushing my luck I reckoned. I had checked it out ahead of the gig and could see that this was likely to be a step too far. One of Stockhausen’s last purely electronic works, from 2007, it is a knotty mathematical puzzle built on 24 structured loops, in a pitch range of seven octaves, played through 8 speakers. It looks intimidating on paper, there is an extract of the “score” in the programme to prove the point. In reality it is terrifying. Even with a fancy laser show I could tell this wasn’t going to do it for me.

So just Stimmung then. One revelation was more than enough on the night. This gets performed by other vocal groups, who presumably know what they are doing. When it does do not hesitate if you have any interest at all in music, of whatever form. I am off to search out a decent recording.