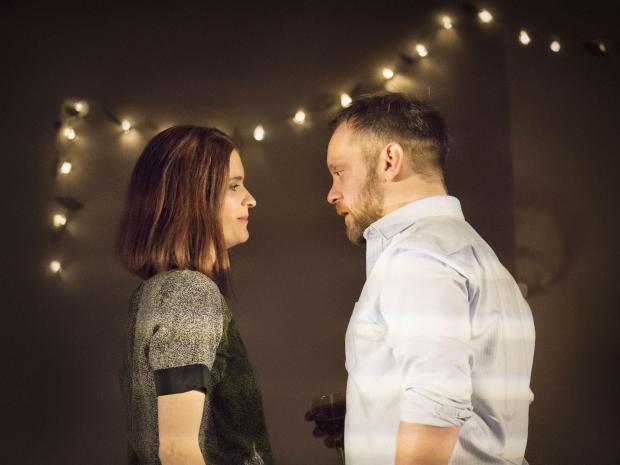 No need for some unseemly outpouring of emotional sharing from the Tourist but let’s just say that the very rare occasions when he has been compelled to confess his regard for another human being have been excruciatingly painful. A handshake is unsettling. Hugging and air kissing, in the absence of drink, promote intense anxiety (maybe this is genetic since MS and BD are exactly the same). Approaching a woman with a view to romance can literally leave the Tourist paralysed with fear. Fortunately the pity reflex seems to have taken hold of certain potential life partners in the past which has allowed the Tourist to deploy, and eke out, his pitiful amounts of charm, and then cling, limpet like, until finally, and rightly, he has been cast off. His strategy of keeping out of the SO’s way has miraculously worked for a couple of decades, but being this useless requires discipline.

Anyway this history meant it was easy to feel sympathy for the characters of Laura and Danny in David Eldridge’s outstanding two hander Beginning. As, judging by the reaction, it was for most everyone in the audience. For the anguish of loneliness and the awkwardness of coming together are feelings that most people (assuming basic needs are satisfied) will experience. I guess there are plenty of other ways to negotiate life but, for most, finding someone to share the journey is a vital goal. Technology cannot change the reality of this negotiation nor negate the risks that come with emotional exposure.

We are in Laura’s flat in Crouch End in the aftermath of a party. Only Danny is left. Both are a little worse for wear drinkwise. Danny halfheartedly says it is time to get a cab. Laura confesses she had wanted him to stay. They talk, they drink a bit more, there’s a bit of music, some tidying at Danny’s behest. They lay open their pasts. And their desires. It is funny, touching and engrossing. The “will they, won’t they” is there but reticence is only a tiny part of what unfolds. This are good people trying to be happy and that is what makes you care.

Now this is not, I am guessing, particularly novel territory for a text to explore. But it is also a subject that is pretty easily turned into inconsequential mush. David Eldridge, who was the leading light in the so-called Monsterist manifesto, is one of our leading playwrights, who has proved he can write at any scale. I am not sure though if he has written at quite such a domestic and personal level before. Whatever. This is still an outstanding text whichever way you look at it. Wry but still affectionate, awkward but not uncomfortable, funny but not played for laughs,.

It can only work though with utterly committed performances to create real characters, and, with Justine Mitchell and Sam Troughton, this is exactly what you get. The ticking of late thirties Laura’s biological clock and the pain of early forties Danny’s separation from his son are universals which could easily lapse into cliches. Not here.

Polly Findlay’s direction doesn’t put a foot wrong, as usual, and Fly Davis’s set, in an end stage Dorfman, is spot on. The movement of the two characters around the set is as revealing as the things they say and the silences and interruptions are perfectly placed.

I see that a handful of tickets pop up on the day. With a bit of luck this will also find its way to another venue to extend the run. If so, go along, and wrap yourself up in their story for 100 minutes or so. You won’t regret it.