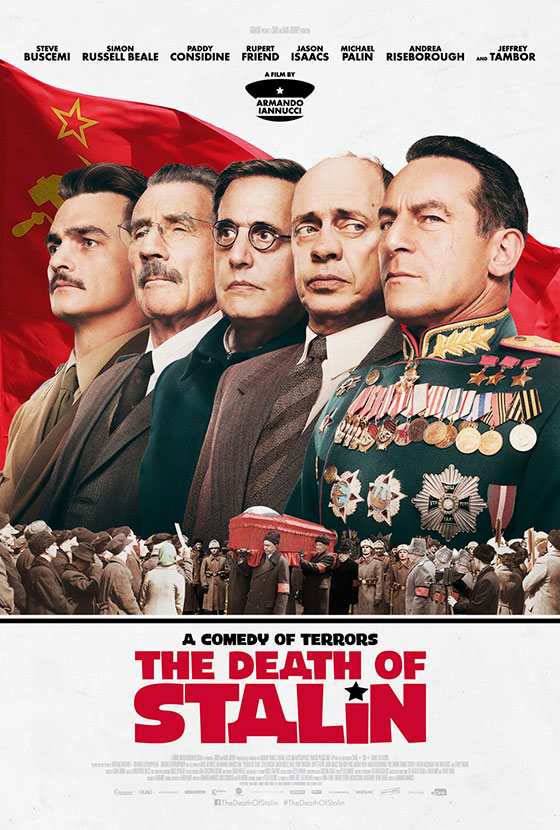 There have been a lot of clever people born in Scotland. In fact there was a time at in the second half of the C18 when it was the smartest place on Earth, the Scottish Enlightenment. All right maybe I exaggerate a bit but not by much. Certainly, in David Hume, Scotland turned out one of the greatest thinkers of all time. There have been many dazzling intellects since then and I would put the satirist Armando Iannucci up there with them.

Many of AI’s early collaborators, (Chris Morris, Steve Coogan, Patrick Marber and Stewart Lee, all big heroes in my world), have gone on to create some marvellous work but AI is the creative with the greatest reach. After The Day Today, the original Alan Partridge shows, (still the funniest comedies I have ever seen), and his eponymous C4 shows, he went on to the masterly political satires, The Thick of It and Veep. His first film was the Thick of It spin off, In The Loop. The Death of Stalin is his second film as director, and was co-written with David Schneider, (who the Tourist, bizarrely, hung out with many years ago), Ian Martin and Peter Fellows. This might be his best work yet.

Political satire is a tough gig. Especially in a world where, as is oft remarked on a daily basis by the commentariat of both established and social media, our politicians seem bent on acting in a way that defies satire. I suspect that this “oh they all grubby, corrupt, clownish, incompetent shysters”, or whatever variation you want to put on that from whatever your political perspective, is a refrain as familiar as Western style democracy itself. However, it does seem that the behaviour of our current crop of leaders in these democracies is particularly eye catching, reflecting their need to satisfy our own narrowing attention spans and mask their own impotence, in a world where capital and labour are increasingly mobile. Other than creating the conditions for the continued explosion of global credit, and orchestrating the mood music of cultural (in)tolerance, our politicians don’t really get up to much.

That doesn’t mean they aren’t tempted to make things happen and that is where we must be vigilant and prevent them doing anything too silly (let’s be honest we are falling short at the moment in the UK and US). Satire is an important component of that vigilance. Taking the piss is a ruthlessly effective way of drawing attention to the ineptitude (or worse) of our leaders and, if it does its job properly, is generally difficult for subject and audience to ignore. A society without satire is a damaged polity. So this is why AI is such an admirable chap in my book.

The Death of Stalin, (which is based on a French graphic novel), does not, obviously, address the failings of today’s Western democracies. It instead takes the year of Stalin’s death, 1953, and the Soviet Union as its subject. Now this was a dangerous and vital place to be a satirist. Modern day Russia has not escaped this legacy it seems. In an ironic twist it seems that this very film has wound up the Russian authorities whose ambivalence about the reign of Stalin looks somewhat ignoble. Whilst the film is rooted in a specific time and place it is pretty easy to see the universal message. Our rulers are human. They are consumed by petty jealousies and, in moments of crisis, often care more about plotting for their own positions and careers than they do about the good of the people.

The film opens with a radio broadcast of a Mozart piano concerto overseen by Andreyev (a frazzled Paddy Considine, currently wowing punters in The Ferryman in the West End which is A MUST SEE). Stalin (Adrian McLoughlin who captures the capricious bully with minimal screen time) is listening. He demands a recording prompting a farcical repeat of the concert. The soloist Maria Yudina (Olga Kurylenko) slips a note into the recording critical of the regime which pre-empts the brain haemorrhage which kills Stalin. All of this may have happened. Well maybe not the note. And the concert repeat may be apocryphal. Maria Yudina was certainly a critic of the regime.

Anyway we had already seen Stalin having a boozy boys night in with other members of the Central Committee. By this time the Central Committee had only nominal powers with the Politburo under Stalin making all the decisions. Remember too that the Politburo had been purged before WWII, and filled with Stalin’s lackeys’s effectively leaving him in sole control. However after Stalin’s death the Central Committee regained prominence, and we see how Nikita Khrushchev (Steve Buscemi) came to power through manipulating the others members of the Committee and orchestrating the murder of the head of the People’s Commissariat for Internal Affairs, Lavrentiy Beria (Simon Russell Beale), the NKVD, the secret police organisation which had carried out Stalin’s purges.

Those are the facts folks, but the way AI and his collaborators show these events is blackly and bleakly comic. These are powerful men holding the fate of an entire nation, embarked on a massive political experiment, in their hands, but they are utterly out of their depth. Some of them could be running a family carpet company in the Home Counties, such is their charisma.

Simon Russell Beale’s Beria is an exception. He is just the personification of the Hannah Arendt’s banality of evil. He is first to the scene of Stalin’s haemorrhage but his first act is to destroy incriminating papers. His cruelty is effortless. As you might expect this is an inspired performance from, in my view, our greatest stage actor (on his day). It takes a bit of time to adjust to Steve Buscemi’s accent as Khrushchev (AI uses natural accents throughout I think) but his paranoid energy and gradual realisation that he can take power are perfectly captured. Jeffrey Tambor plays Georgy Malenkov, the hapless Deputy who easily yields first to Beria, and then to Khrushchev’s, manipulations. The scenes where Michael Palin’s Foreign Affairs Minister Vyacheslav Molotov, the great rhetorician, is unsure whether to condemn or embrace his returning wife, are priceless. The rest of the Committee is made up of Paul Whitehouse’s wideboy Anastas Mikoyan, Paul Chahidi’s effete Nikolai Bulganin and Dermot Crowley’s blunt Lazar Kagonovich. Jason Isaacs’s war hero General Georgy Zhukov is gloriously over the top as is Rupert Friend as Stalin’s embarrassing pisshead son Vasily. Andrea Riseborough plays Svetlana Stalin as manipulative brat.

This is an outstanding cast and a marvellous script. It is not the laugh out loud humour of The Thick of It or Veep, and the grotesquerie is constrained, though very real. It is in some ways a serious satire, in the sense that what you see is utterly believable even if what happens is not historically verified. It is full of detail and beautifully put together. And the ending reminds us that, beyond the vanity and scheming, these people bear collective responsibility for a violence which decimated a proud nation