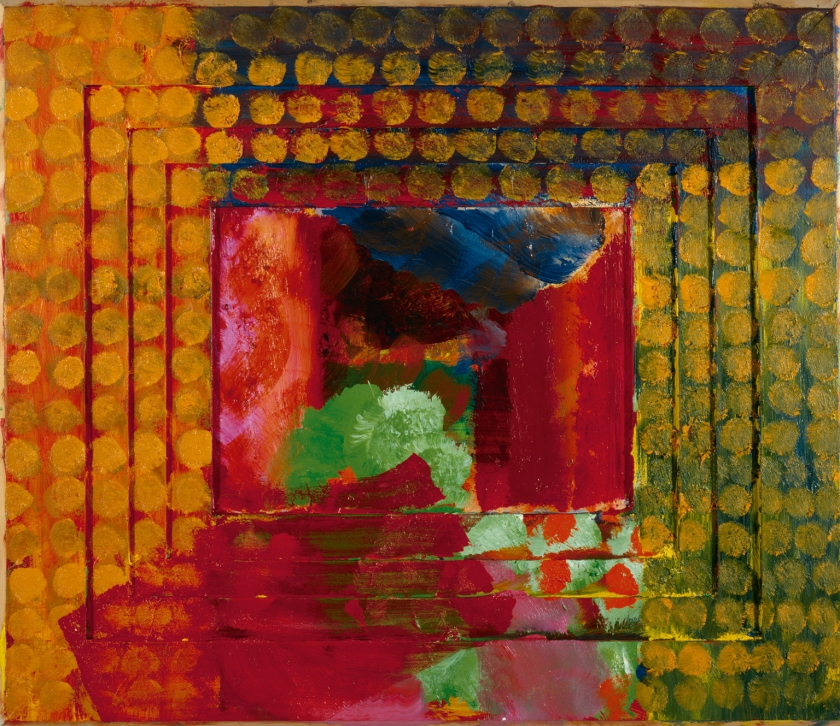 I haven’t really known what to make of the work of Howard Hodgkin who sadly passed away just before this exhibition began (having been involved in its creation). And I am still not sure what to make of it.

This was the first time I have seen a solo exhibition; previously I had only seen a few works in permanent collections. Now clearly it is impossible, at least for me, not to bowled over by the vibrant colours that he employed in his work and by the exuberance of the mark making. On the other hand I cannot say that I get any great reaction beyond this.

This exhibition focusses on his portraiture. This was largely done from memory and Hodgkin was always trying to capture the essence of the person or persons he was painting – the memory if you like. This means that his portraits became ever more abstract through his career, such that, by the end of his life, just a couple of broad brush strokes might suffice to capture the emotional core of his subject.

The problem for me is that as an observer I have no knowledge of these subjects (many of whom were fellow artists or collectors) and so cannot relate to the essence he has focussed on. So I am then just left with the colour and the patterns which, in some, though not all cases, are extraordinarily bold, vivid and certainly uplifting, with beautiful paint, but, unfortunately, offer me nothing beyond that. With more figurative portraiture, though not mimetic, I am able to see and examine the subject in a way that Hodgkin’s work precludes.

So definitely worth a good look and I have learnt far more about this important, though taciturn, British painter of the last few decades, but I am not sure he is an artist I will seek out in future visits unlike some of his contemporaries. Though as with other vivid colourists, there is no doubt that a good stare at their work makes subsequent real world colour burst into life, at least for a few hours. Be happy.