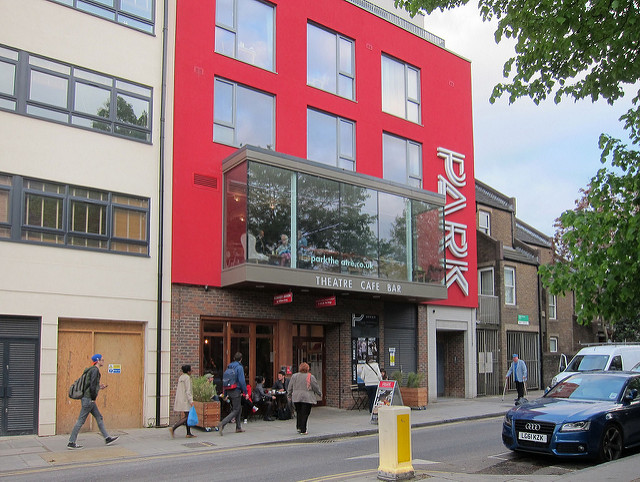 I wonder if the 2070s equivalents of the Finborough Theatre or the Orange Tree Theatre, will be lauded for their Philip Ridley revivals. Mr Ridley’s subject matter and idiom means he is a nailed on certainty to get multiple airings in today’s theatrical world. His art, his novels particularly for young adults, his screenplays, his songs and his plays, again especially those aimed at the youth and away from old fellas like me, have a vitality and urgency, and attention grabbing narrative invention, which is hard to resist.

On paper his first play The Pitchfork Disney takes your breathe away. In the flesh, as it were, it is even more extraordinary. Remember this “in yer face” work was the first of its kind and budding young playwrights everywhere still likely harbour ambitions, knowingly or unknowingly, to capture some of its essence. The Fastest Clock in the Universe, in its dissection of self-image, and Ghost From a Perfect Place, loaded up with more graphic violence, built on its foundations. The ugly themes the plays explore, and our complicity with those themes as observers, remain compelling over two decades later.

I don’t know any of the plays which followed these debuts, the Brothers Trilogy, Tender Napalm, Shivered and the later adult plays. I saw the recent staging of the six monologues that make up Angry at the Southwark Playhouse. Not good I am afraid, like a student attempt at sketching out some short “Philip Ridley” style plays and a couple of limp jokes.

So I wasn’t sure what to expect from this revival of Vincent River, Mr Ridley’s fourth adult play, written in 2000, which followed the breakthrough trilogy. Well I can concur with those criterati who say this might just be his best play. There is a violent act which lies at the heart of the play, the theme is clear and vitally important, the behaviour if the characters unpredictable, the story is in real time, there are a couple of lightly shocking interactions and, yes, some drink, drugs and swearing. Yet, importantly, we get to see and feel the impact of real life horror on two real life people uncluttered by Mr Ridley’s fantasy.

Whilst the “twist”, such as it is, is unlikely to surprise I will spare you the detail. A middle aged woman Anita is moving into a threadbare flat in Dagenham having moved from LB Hackney, (Mr Ridley’s cabbie like enthusiasm for London’s geography is on show as usual though Shoreditch has moved on a bit since then). Her son Vincent has been murdered in what transpires was a brutal homophobic attack at a disused railway station. Davey arrives. He clams to have discovered Vincent’s body whilst walking his girlfriend home. The play then explores, across a compact 80 minutes, the connection between the two.

We are reliant on our two actors to let go in this highly charged scenario and, fortunately, they do. Moods change in an instance. I do not think I have ever seen Louise Jameson on stage before though she has had an illustrious theatre career with the RSC and the National Theatre. You will know her best from the telly. Sounds like she is taking on more work in the theatre. Thank goodness. This is not an easy role but you wouldn’t know it from this performance. Anita is grieving for sure, but she is also angry, with her son’s killers yes, with the authorities of course, but also with herself. She still hasn’t yet quite come to terms with her dead son’s sexuality. Tricky to convey. I hope she won’t mind me saying though that debutante, (just about), Thomas Mahy, might have have outshone her. He is a real talent. When the going gets tough and emotional, as it does with his monologue near the end, he is shatteringly convincing. He is more vulnerable than menacing at the start but that worked for me. These characters agree to be honest with each other to seek truth and maybe some absolution. This pair of actors need to be similarly honest. They are.

Robert Chevara is a new director to me though now I see what he can do, and has done, in the world of opera specifically, I see I have been the loser. The play doesn’t require complication. Nicolai Hart Hansen’s set and Martin’s Langthorne’s lighting oblige. The Park 90 space fits the bill. This needs to be seen up close. Mind you I don’t suppose this is the product placement Tanqueray and FeverTree, Anita’s chosen tipple, were looking for,

I see that, for once even allowing for how far I have got behind in documenting my cultural adventures, (trust me you learn a lot by having to write about what you see), this production is still on for a few more performances. Go see it. Obviously if you a big fan of blockbuster musicals this may not be your bag but if you want to see what Philip Ridley is about, without the overt savagery, then this is for you.

So I think this at least will be a play that will be revived at the other end of the century. Hopefully as a warning about the dark times when people were attacked and even killed for their sexuality. Though given that has been true for many centuries I wouldn’t bet on it. Yet another thing to curse organised religion for. The well from which much intolerance springs.

I note that there was indeed another production of this very play in Manchester contiguous with this. As for Mr Ridley’s other plays. Of course they will appear, if only because there is a long line in the history of drama, back to the beginning, which seeks to shock its audience both for noble and ignoble purposes. And Mr Ridley, for all his narrative innovation, (and the gifts he serves up to designers), does have the words to back up his conceits of character and location.

Mind you at the pace with which society, and the art that reflects it, is changing who knows what will be de jour in 50 years time. Maybe there will be no live theatre – just a virtual reality experience you conjure up yourself. Like dreams and imagination. Whatever you do don’t click “I accept” and hand those over to the tech corporatocracy.