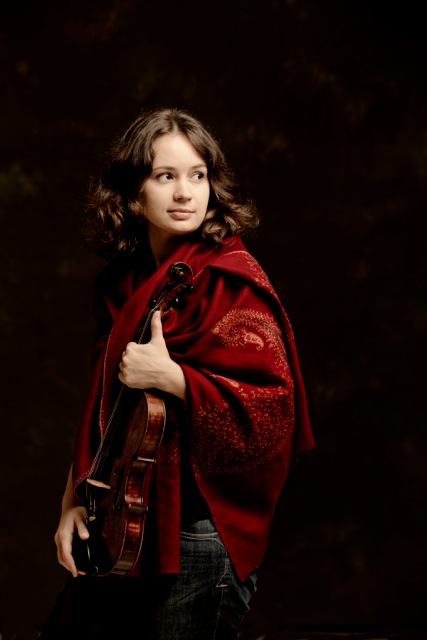 I have banged on before about the virtues of Moldovan-Austrian-Swiss, (forget national borders people), violinist Patricia Kopatchinskaja before, slam-dunking Berg or crossing musical boundaries with cellist pal Sol Gabetta (Kopatchinskaja and Gabetta at the Wigmore Hall review ****). She was at it again, this time with the Stravinsky Violin Concerto, alongside the London Philharmonic Orchestra under the baton of Thierry Fischer a relatively late replacement for Andres Orozco-Estrada.

This was another in the South Bank’s Stravinsky exploration kicking off with Igor’s Symphony of Psalms. Three parts, with Latin settings of psalms 39 (verses 13 and 14), 40 (verses 2,3 and 4) and 150, played without a break, and constructed as a Prelude, a Double Fugue and Symphonic Allegro. Inventive enough for you? Well just to keep you on your toes IS boots out the clarinets, violins and violas from the accompaniment to his four part choir, (kids preferred by IS for the upper two parts but I reckon women, as here, is better). He adds in not one, but two, pianos and a harp to augment his already hefty woodwind, brass (a tuba, lovely), percussion and the big strings.

The first part then is like some mutant Russian/Byzantine/Baroque/Neo-Classical jazzy chorale with ostinatos broken by thick E minor chords. That is the joy of his counterpoint. Then the fugue in C minor kicks off in the woodwind, all heavenly-mysterio, then the chorus kicks in with the second fugue, then we swirl around in heaven with some Mahlerian horns bubbling away in the background until we get some rounding homophonic pronouncements at the end. The final section starts off all stark, austere and hairshirt, like the end not the start, until the propulsive allegro kicks in with a trumpet-harp motive. There is a chordal tune, a bunch of exuberant triplets echoed by the chorus and a striking running tune for horns and pianos. The slow beginning is repeated, with more warmth, and then revisited in the final Haydn-esque coda as we rise up to the stars. There are Allejujas all over the shop. This is the longest section as it incorporates the whole of Psalm 150 and it is remarkably uplifting.

The piece was written, for the Boston Symphony Orchestra, in December 1930. It could only have been written at that time, by that one man, and yet …. so much of it echoes down, and forward through, the centuries. I know how daft that sounds but it is, even by Igor’s standard’s, remarkable music. Now you would normally reckon that the London Symphony Chorus rules the big choral roost in the capital. On this showing you’d be wrong. The London Philharmonic Choir under Neville Creed were on scintillating form. Bravo.

If singing this marvellous work were not enough, (though I appreciate how much work they put in ahead of it), the choir were treated to a sit down and Ms Kopatchinskaja’s astonishing fiddling. Now she certainly has a singular, and confident, performing style. Bare feet, big gown, lots of hopping and skipping about, hair tossing, it is pretty difficult to take your eyes off her. Fortunately Pat Kop, (yep, that’s her own branding), delivers a sound to match the charismatic gypsy schtick. The first movement Toccata is a souped up slab of florid Baroque, the middle two Arias exactly that, the first an upbeat shakedown, the second balladic if you will, and the final movement, Capriccio, lands us back in the heyday of early C18 Venetian virtuosity. The LPO and Mr Fischer were more than a match for their soloist keeping up, and once or twice, spurring on our self-assured diva. IS asked for a big orchestra, though again with constrained strings, but wisely never let it loose collectively, allowing the violin to always shine.. This suited Pat Kop who just about stayed the right side of insistent.

Remember when IS sent this score out to the world in 1931 his dedicatee violinist ,Samuel Dushkin, was a little intimidated by the “unplayable” wide spread three note chords which kicks off each movement. IS told him not to panic, it was a piece of cake. Once again Igor, a piano player not a violinist remember, was right and the received wisdom of the expert was wrong. He writes one violin concerto and no composer since has escaped its influence, in terms of how to relate violin to orchestra. And yet that very concerto is suffused with history. Pat Kop though wrestled with the Baroque to ensure that none of Stravinsky’s sly humour was lost.

Big, bold stuff from a soloist and and orchestra who have mastered the work. The encore was Pat Kop’s own party piece cadenza which draws on material from the Concerto, nods to Bach and ropes in Pieter Schoeman, the LPO’s leader, to act as counterpoint. Her discography shows she isn’t going to be bounced into just churning out the classics.

The Choir then took centre stage, from the rear as it were, with performances of three choral pieces that IS wrote in France after he returned to the Orthodox faith. He was a profoundly religious chap, for all his musical revolutions, and these settings, of the Lord’s Prayer, the Creed and the prayer to the Virgin Mary. Initially set in Church Slavonic he revisited them in later years and transposed them in to Latin texts. The Credo is chanted in devotional harmony, the Pater Noster in similar meditative fashion with a syllable to each note, with the Ave Maria sing-song-y making more extensive use of melisma. IS offered no markings so the choir and its leader have plenty of expressive headroom.

I was pretty sure I wasn’t going to be persuaded by the Chichester Psalms. I wasn’t. I just don’t get on with all that flash Harry (Lenny), sub-West Side Story, Mahlerian heart-tugging. Sorry. Young treble William Davies, understandably initially nervous, stepped up in the middle movement, well done, and the crowd seemed very pleased with the piece so what do I know.

Overall then a fine evening’s entertainment and well done to Mr Fischer and Mr Creed for guiding everyone through it. And sign me up to the Pat Kop fan club.