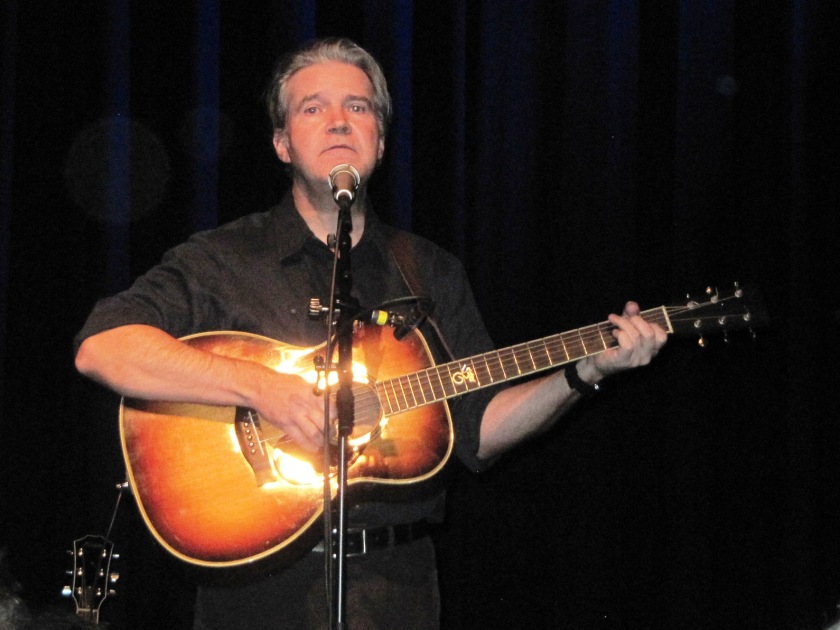 No idea why I like the music of grouchy, arch, wistful, charter of failing relationships,  Lloyd Cole. I have never felt sorry for myself in my life. Well maybe a bit. Oh alright then, practically every day. Here is a man who, at least early on, in the 3 albums with the Commotions and 4 solo albums which span the period of this Retrospective Tour, re-invented the pop music staple love song with indelible melodies, demon hooks and ridiculously clever lyrics.

It has been a very long time since i saw him him live, 1985 I think, Hammersmith, Palais or Odeon, I can’t remember. I should have made more of an effort to renew the acquaintance based on this gig. So what do we get? Stripped back acoustic versions of pretty much all his classic songs, which I detail below thanks to someone with a better memory than me, a marvellous take on Leonard Cohen, one of his heroes I think, and a winning line in self-deprecation. This primarily revolves around his age (he’s now 57) though as he remarks most of these songs written between 1983 and 1996 (bar one, Myrtle and Rose, dedicated to his Mum in the audience – awwh) come from the hand of some-one older than his years.

Now I gather in some gigs in the tour he has been joined on stage in the second half by one of his sons which I can see may have pepped things up a bit. Not a criticism. These arrangements are wonderful and Mr Cole is, and has always been an adept guitarist, but there were one or two moments where I missed some of the complexity of the lines which makes him a genius songwriter. Not the words, they still sound as fresh and inventive as ever, but the instrumental hooks which pepper the songs. On the other hand, I reckon his voice, for the Commotions songs especially, may be better than in his youth. Richer, deeper, more soulful as you’d expect but still absolutely clear and not at all ragged as with some “old” pop stars.

Dragged the SO along. She’s no fan, and this didn’t convert her, but was won over by his humour. He even has special words of recognition for the patient multitude of unwilling partners dragged along here.

So if you are, or were, a fan, a triumph. My favourites? I Din’t Know That You Cared, My Bag, Butterfly/Famous Blue Raincoat, Are You Ready To Be Heartbroken?, No Blue Skies, Perfect Skin and, obviously, Forest Fire (which is one of my favourite songs of all time anyway).

Once again I find myself reviewing an event that is over, by which I mean the tour, unless you happy to be near the Theatre Royal Margate tonight. If he does pop up again anywhere near you, and you are umming and ahhing over going. Don’t. Just go. At the very least you will see loads of fifty-somethings with terrible dress sense from around your area.