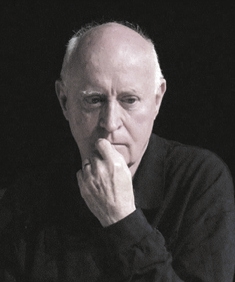 Now one of the manifold pleasures of being a layabout theatre addict is the ability to pitch up midweek to one of the invariably excellent performances served up by the students at London’s prestigious drama schools. Outstanding talent, likely to go on to glittering careers, matched by similarly gifted technicians and creatives and often guided by big name directors and designers. The auditoria at the Guildhall and RADA are some of the best in London, state of the art, comfortable, with perfect sight lines, and tickets are a bargain.

What’e not to like. Well as one, slightly confused, old boy at one performance I attended remarked afterwards, “they’re a bit young aren’t they”. Even if we accept the literal truth of this it rarely matters, with audaciousness often trumping inexperience. Best of all it often gives the curious theatre-goer a chance to see “classic” plays which maybe don’t often get an airing for one reason or another.

That certainly describes Saved. Edward Bond’s (in)famous 1965 play. The play premiered at the Royal Court Theatre to a private audience, as writer and director, William Gaskell, refused to make the cuts demanded by the Lord Chamberlain’s Office to secure a licence. The Lord Chamberlain decided to prosecute. The theatrical world was outraged, and, despite those involved in the production pleading guilty and getting fined, the absurdity of this censorship eventually helped to hasten the demise of this licensing system in 1968. The play was then immediately revived at the Royal Court, but was rarely performed thereafter, (in large part because Mr Bond rejects most professional requests to perform it), until Sean Holmes, (of course given his pedigree with provocative theatre), took it on in 2011 at the Lyric Hammersmith.

Autodidact Edward Bond, (there he is above), brought all the violence he had seen through the war years, and in his working-class upbringing, to bear on Saved, his second full length play. Indeed violence is the theme that runs through much of his work and his influence on later generations of British playwrights is patent. Saved is set in the South London of the 1960’s, socially, culturally and economically impoverished. This is no “kitchen-sink” period piece though. In some way it could have been written yesterday with a few tweaks to the language, (it being a fairly hackneyed, “gor-blimey”, argot with fairly pedestrian swearing).

Len and Pam hook up. They go boating, where Pam meets Fred, who she falls for even though he is a prize sh*t. Len has moved in with Pam and her parents, Mary and Harry. Theirs is not a happy marriage. Pam has a child by Fred, though neither turn out to be naturally suited to parenthood it’s fair to say. Fred goes fishing, watched by Len. Fred’s mates turn up ,as does Pam with the baby. She leaves the baby. Goading each other on, the gang taunts, and then stones, the baby in its pram. When Pam returns she doesn’t realise her child is dead. Fred is jailed for his part in the crime. When he gets out Pam begs him to come back to her. Len and Mary flirt. There is a huge row. Len fixes a broken chair: offering some hope of redemption at the end.

It may sound like bleak, visceral stuff. The central scene which so offended the critics at the public premiere is brutally shocking. As shocking as I have seen on stage. Violence may permeate contemporary culture, but theatre makes it more “real”. To the gang the baby is no more than a “thing”, such is their poverty of empathy. Despite this extreme, the play seems to me to present some real truths about an alienated society and the psychological damage it inflicts on people. No need to chuck drink, drugs, crime, consumerism, media into the mix. The essence of the relationships, fuelled by anger, resentment, bitterness, jealousy, boredom and frustration, rang true to me without foregrounding these addictions. The violence simmering under the surface of humanity colours each scene, each line, each interaction. The tone is not moralising, hectoring or judgemental. These are delicate, damaged, hopeless people. The final, wordless scene, is almost as affecting as the central, brutal scene.

Edward Bond’s plays were increasingly ignored from the 1980s, in part reflecting his own dissatisfaction with contemporary theatre practice. His most recent plays have been largely confined to the Big Brum company in Birmingham in this country, though his work is more widely performed in Europe, especially France. This is a shame, if that is the right word for drama suffused with violence. I would love to see, Early Morning, the surreal satire that followed Saved, or his other “classic”, Bingo, which puts a violent twist on Shakespeare’s later years. In fact, on the basis of Saved, I would try any of his work now that I have read about it.

He does though allow students to take on his work regularly. Which gave this accomplished cast an opportunity they all grasped with both hands. Toheeb Jimoh as Len had something of the observer about him, complicit in his manipulation by Pam, Fred and Mary. Shalifa Kaddu’s Pam was riveting, initially confident, crushed by Fred’s rejection, finally consumed by anger. I was also extremely impressed by Ellie Rawnsley as Mary, who effortlessly captured the brassy bearing and rancour of a character twice her age. Similarly Alex James-Cox, with very little dialogue until his heart to heart with Len near the end, shows Harry as a careworn, shuffling man clinging to routine to fill the void of his life and marriage. Joe Bolland, who played Fred, was perhaps the most assured. This is a powerful, brilliantly constructed play, make no mistake, and this cast, under experienced director John Haidar, did it real justice.