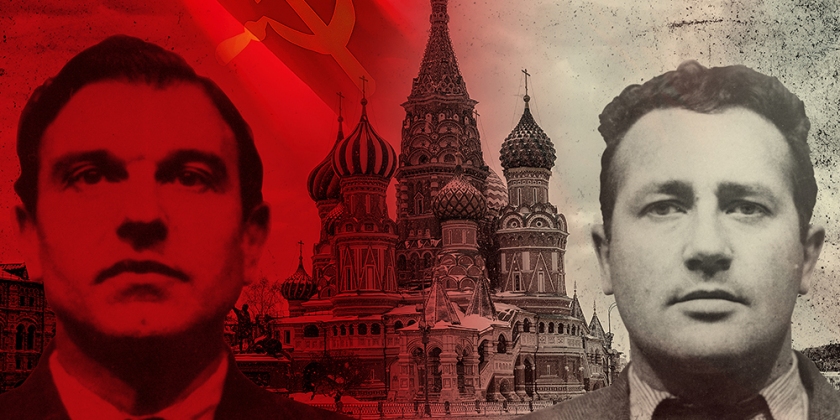 This was my first experience of the work of prolific playwright/novelist/diarist/academic Simon Gray whose stage texts were so adored by luminaries such as Peter Hall, Harold Pinter, (who directed many of his premieres), and Alan Bates, (who starred in them). Cell Mates, of course, is (in)famous for being the play that national treasure, and all round wonderful person, Stephen Fry bailed out of whilst suffering a bout of depression. Simon Gray in turn wrote, somewhat acerbically, about this very episode.

This is the first London revival of the play since that fateful night in 1985. It is based on the true story of the relationship between notorious Dutch-born, British spy and double agent George Blake, and Irish petty criminal and fixer Sean Bourke. After divulging top secret intelligence and details of military exercises to the Soviets in the 1960s Blake had been sentenced to 42 years for treason. In Wormwood Scrubs he met Bourke and they hatched a plan to “spring” Blake in 1966, with help from communist sympathisers on the outside, who then fled to “sanctuary” in Moscow. When Bourke got out he followed Blake to Moscow and then found himself trapped there, by the KGB, with, it seems, the connivance of Blake.

So a meaty story of prison breakout and spy drama. But Simon Gray is less interested in the plot which might naturally unfold from this extraordinary story and more in the relationship between the two men. Both clearly were remarkable in their own ways. Blake, by all accounts, was a gifted, if flawed, character. Schooled in Egypt after his father’s early death, flirting with religious vocation, he joined the Dutch resistance in his teens, was caught by the Nazis, but escaped to Britain. His linguistic skills saw him posted to some hairy places fairly early on in his career before he was turned by a Soviet agent whilst he was imprisoned in Korea. His idealogical shift had, ironically, been fuelled in part by a course in Russian he took at Cambridge. Bourke, as his plan demonstrates, was a resourceful man, with a liking for a drink, and ” a strong sense of the dramatic, an ability to dissemble and an obsessive pride” to use Blake’s own words. Textbook Irish Rover.

We see the conspiracy hatched in prison, the immediate aftermath of the breakout and then four scenes set over a year or so in Blake’s flat in Moscow. So with this back story, and these characters, you might expect high drama. You would be wrong. The tone is surprisingly low-key. The two men clearly come to depend on each other but we do not, I think, really understand why. They find themselves effectively imprisoned once again and I guess we are supposed to reflect on how this came to pass, and whether, in the case of Blake (who is still holed up in Moscow in his 90s), a life of duplicity doomed him to permanent unhappiness and loneliness.

There is some, unsubtle, humour provided by the two KGB agents played by Danny Lee Wynter and Philip Bird, who “observe’ the pair along with maid Zinaida played by Cara Horgan. The two leads, Emmet Byrne as Bourke and, especially, Geoffrey Streatfeild as Blake, do an admirable job in fleshing out the enigmatic couple and Edward delicately directs what is clearly a cherished project for him.

Overall it was just a little too restrained for my liking though. I could see that I was watching something worthwhile but I was never quite persuaded that it really was worth my while. Alan Bennett’s double header, Single Spies, is also by no means a perfect drama, but shed more light, for me, on the curious mix of arrogance, principle and self-loathing that seemed to compel the likes of Blunt, Burgess and Blake on their journey to treachery.