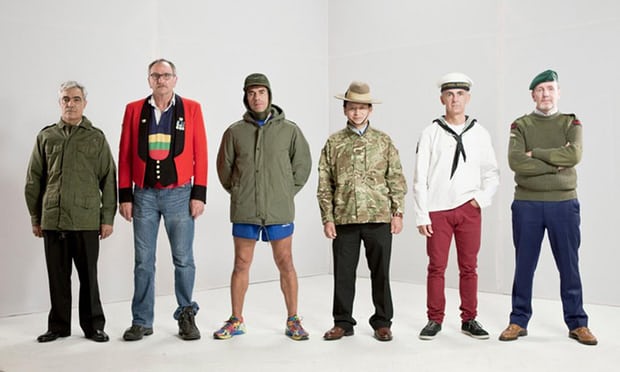 Argentinian writer, Lola Arias, in her own words, explores the “overlap zones between reality and fiction”. Minefield though is all reality, in the rawest, most uncomfortable and, ultimately, moving way imaginable. She has devised a powerful piece of theatre, documenting the tragedy of war, from the testimony of six veterans of the Falklands/Malvinas war. It has toured the world since its original airing in Brighton in 2016 and, if you can’t make it to this run at the RC, I would thoroughly recommend you try to see it should it turn up near you.

The six veterans, now all in their fifties, Lou Armour, David Jackson, Ruben Otero, Sukrim Rai, Gabriel Sagastume, and Marcello Vallejo, are obviously not professional actors, though they are men of immense talent, but boy can they tell a story. They chart, in English and Spanish, with appropriate sur-titles, the audition process (“the rehearsals for this play took a little longer” than the war), how they became soldiers, (by choice on the British side, by random conscription on the Argentinian), the media representation of the war, their arrival in the Islands, the endless waiting, some specific events (the sinking of the Belgrano, an Argentinian patrol blown up by their own mines, a jet attack), key battles, the last day of the conflict and coming to terms with what had happened to them on their return to civil society.

The production mixes projection (of newspapers, magazines, letters, photos), live video, re-enactment, masks, interviews, some very fine live music, props and mementoes, even some model soldiers, with a barrage of lighting and sound, all to mesmerising effect. We see the conflict from multiple perspectives. There was much that was new to me. The key though was the six honest men up there on stage. And their memories. The war has never left them. Most affecting is Lou Armour watching his younger self on video explaining how an Argentinian officer died in his arms. And Marcelo Vallejo describing to David Jackson, now a psychologist, his years of anger and addiction after the war.

No simple resolutions, still visible disagreement about the causes, let alone the outcome of the war, but it seemed to me that the experience provides some shared catharsis for these participants. A moving, intelligent and never inert remembrance.