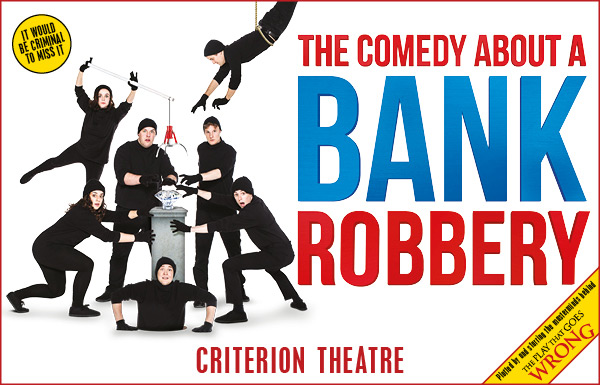 The Comedy About a Bank Robbery

Abandoned by the SO, and with BD now, like MS, deep in academe, LD and I needed entertaining. The solution. A fix of Mischief Theatre. Now it is not the first time we had seen this. The whole family had been to TCAABR before, and we have hoovered up the rest of Mischief’s output with relish.

Why? Because it is very, very funny. We would probably still say The Play That Goes Wrong is the best of the three, and TCAABR works in a very different way, what with its “screwball” feel and American setting, but frankly all three, (assuming Peter Pan Goes Wrong pops up again – maybe courtesy of Auntie Beeb), are must sees. TPTGW is on tour in the UK next year. Do not miss it if it comes anywhere near you.

Comedy in the theatre is tough to pull off. Comedy in the theatre which really makes you laugh is really tough to pull off. Comedy in the theatre which makes a diverse audience laugh is even tougher. TCAABAR takes a surefire plot winner, a bank heist, and, with a combination of unsubtle punnery, farce, slapstick, visual jokes, often spectacularly constructed, and one-liners, the nine strong cast, (the three original MT founders are now in the Broadway runs I think), fair whizz through the action so that the whole thing is done and dusted in a couple of hours. This is an extraordinary physical performance from all concerned as much as anything else.

No plot details here. You will see for yourself if you have any sense. What I will say, and this is where a second viewing, (from stalls vs our original circle perch), really drives it home, is just how flipping clever the whole thing is. Not just in terms of the action, but how this fits together with the set. The proscenium arch stage in the Criterion, which itself is buried underground, is not huge and shifting between the scenes requires precise stagecraft. The eight main characters, and one other actor who takes on all the other roles, also act as a chorus during the transitions which are often accompanied by musical numbers which match the 1958 Minneapolis setting. Adding yet more texture.

My guess is that this is going to run for some time yet but no point in delaying the pleasure. Get the family out for a Christmas treat. It might turn out to be your seasonal highlight.