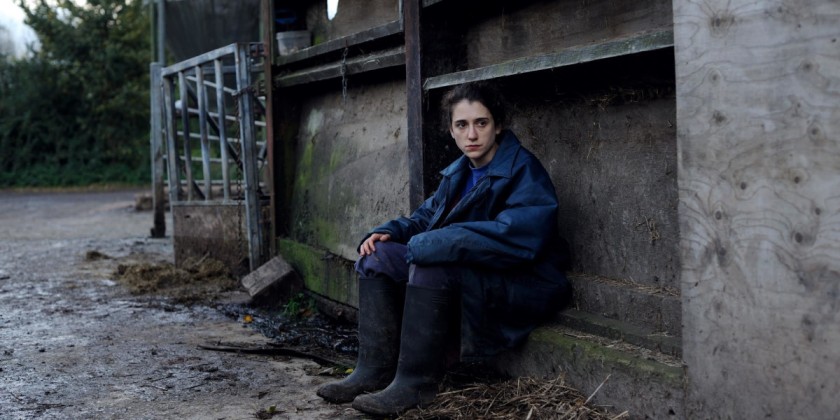 This is director Hope Dickson Leach’s full length film debut. In the screening I attended there was a short but illuminating interview with Ms Dickson Leach which discussed the difficulties female film-makers face in bringing their ideas to fruition. She gave up for a bit but came back. And she eventually managed to get financing for this film. Well all I can say it thank goodness she didn’t give up and thank goodness she got the money. This is a genuinely outstanding film. I can’t wait for her next outing – I’d be happy to give her a few quid if it helps

Clover, played by the astounding Ellie Kendrick who apparently is in that Game of Thrones frolic, is a veterinary science student, who returns to the family dairy farm on the Somerset Levels following the death of her brother Harry. Dad, Aubrey (David Troughton), it is fair to say, is somewhat emotionally stunted. The farm is a mess having never recovered from flooding and with no insurance bailout. Aubrey has abandoned the house to live in a caravan in the farmyard. He likes a drink. The two then fail to talk to each other in any meaningful way as the events that led up to Harry’s death are played out – not just the immediate past but over many years.

It is beautifully shot. This is not a conventionally attractive landscape. No attempt is made to leaven the atmosphere. The sun doesn’t shine at all. It rains quite a bit. There are however sone striking close ups of nature to remind us where we are. A farm is not a classic location for a British film I believe. We city types dominate the medium and the rural normally appears more arcadian that Hobbesian. The fragility of the existence and the temptation to take risks to secure economic viability is deftly portrayed. The sheer hard work of running the farm is not hidden.

Not much happens. Not that much is said. But the despair, disappointment, resentment and blame that the two central characters feel is remorselessly laid bare. You want to shake them to sort it out and swallow their pride. You know they can’t. The emotional intensity of the ending is shattering. All of this is accomplished with relatively sparse dialogue and there is loads of detail which remains ambiguous if not entirely elusive. What happened to Mum, why did Dad despise Harry, how exactly did Harry meet his end, what was the relationship between Harry and his best mate James (Jack Holden), who dreamt up the dubious plans to rescue the farm, will Clover stay and why? Don’t let me give the impression that this is in any way frustrating – it is what makes the story so utterly compelling.

The proper reviews have observed how this looks and feels like a horror film without the horror. It certainly begins in that vein. This is apt. Except, as those reviews have also generally observed, the unembellished horror of what has happened to this family is all too real.

If this all sounds more art house foreign auteurish that the Archers you’d be right. Ms Dickson Leach has herself cited the influence of the Dardenne brothers and Bruno Dumont (note to self: find out who these chaps are). Then again it is just so English – in the where certainly, but also in the who and the why.

I could go on and on. The mark of any great film, play, book, artwork is that it stays with in the days and years that follow its viewing. This slam-dunks that test. It will get under your skin. I doubt there will be a better female lead performance this year. Hope Dickson Leach is a mighty talent. And all this probably done for less than the bog paper bill for the cast of Pirates of the Caribbean: Just Serve Them Up Any Old Sh*t.

And this father – daughter relationship is throwing up some truly great films (Toni Erdmann, Graduation as well as this). Maybe there really is still some cinematic mileage in BD’s withering glances following my hilarious observations.