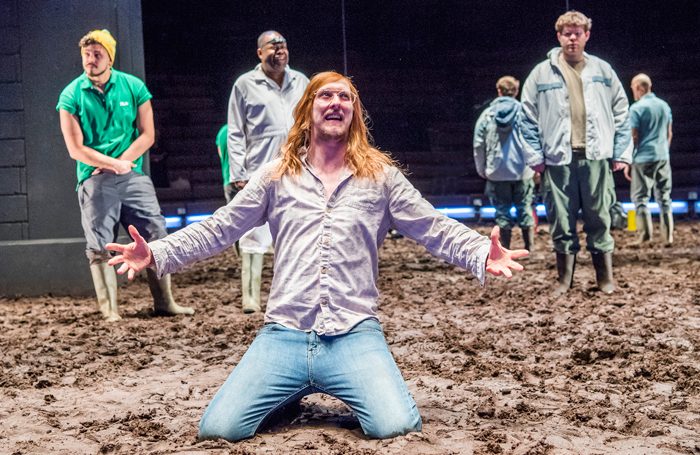 Earthy. That pretty much sums it up. I don’t generally hunt out productions of the Dream. It isn’t my favourite Shakespeare and I am not sure what surprises cast and director can generally bring to the table.

However once again (as with his Measure to Measure last year also at the Young Vic) director Joe Hill-Gibbons proved me wrong as I hoped he would. Thing is he has an idea/s and he runs with it/them. Obviously fairy dust Dreams are just plain silly. But if you are going down the darker route then follow through on it. This production certainly did that.

Having the cast stuck in a stage full of mud definitely brought the story back to earth. Having the 20 odd cast all on stage throughout the 2 hours also anchored events as they drifted in and out of the action. The fighting couples had real venom. Bottom and Titania had a proper canoodle. Theseus/Oberon and Hippolyta/Titania had a weariness in their spats. Our Puck was just doing his job, not always with puckish enthusiasm. So like I say firmly rooted in the real world which then means the dreams are properly located in the Freudian and not the fairy, with all the attendant sex and violence impulses. Little but effective flourishes, Bottom’s tights for ears, man boobs and a bottle for a c*ck, Puck’s string vest, a properly compact Hermia. A bit of text tightening and rearrangement and some quality performances and this was delightfully clear. And the mechanicals were rightly kept in check. Funny enough but without distracting.

So a great success for me though I can see why it might wind others up something rotten. There were a bunch of school kids there at the matinee I attended. Well behaved but going in bored. Now I am not saying they were converted but this was clear enough to begin to draw many of them in. And that’s the acid test.

Wouldn’t want to single any of the cast out (all 4 lovers were great) but Leo Bill was a quality Bottom and I am a big fan of Anastasia Hille (in the Barbican Hamlet and NT The Effect previously). Lloyd Hutchison also captured the Puck/Egeus that the director I think demanded to a tee.

So I await with great interest Mr Hill-Gibbins next assignment.