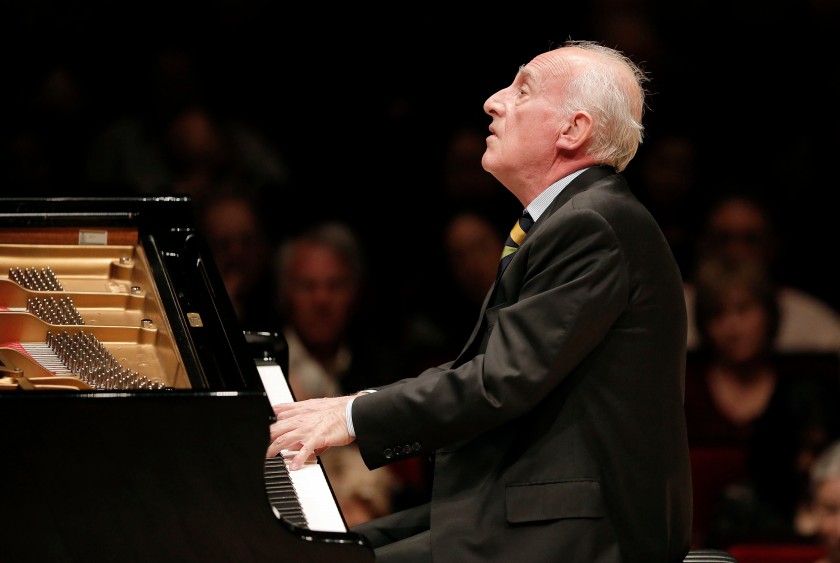 Now I am afraid I don’t know much about classical music but I am learning. I can’t read music or play to save my life. There are vast chunks of the classical music canon that I don’t get on with. I have recordings of the composers I do get on with though in only a few cases do I have more than one recording of the same piece.

But I do know what I like (a statement which will need debunking when it comes to culture generally but that is for another time). And what I do like is Maurizio Pollini playing Beethoven. His recordings are my favourites (along with Paul Lewis, Glenn Gould and a bit of Ashkenazy). Now I have no doubt that there are other recordings I should explore but all in good time.

So suffice to say I was bound to like this. However I was not bowled over by his Chopin performances in February at the RFH (and I did not stay for the Debussy – on the list of stuff I don’t get on with I fear). This however was altogether a marvellous experience.

Pollini for me makes sense of the music in a way that I can understand. I gather some think him a bit cold and clinical if I read the reviews correctly but for me I hear the logic of the music laid out with perfect clarity with enough emotion to lift me up as well.

He kicked off with some Schoenberg. Now I know I am supposed to grasp why Schoenberg was so important to the development of C20 music. I am also coming on in leaps and bounds with my appreciation of contemporary classical music and have started (slowly) delving in to the likes of Xenakis and Ligeti for example. And I can genuinely say that I am starting to “get” some of this stuff.

I can also claim to be making progress with the boy Berg having seen and heard Woyzeck, Lulu and the Violin Concerto in recent months. No idea yet why Woyzeck is so clever in terms of musical construction as I can’t hear the structures yet but I think I will get there.

However so far Schoenberg has eluded me. Mind you that may reflect the fact that I have only heard that Verklarte Nacht a couple of times live and that to me is a bit of syrupy romantic tosh that I cannot fathom.

Now I can’t pretend that Mr Pollini has converted me but I did concentrate on the two pieces he played in a way that pleasantly surprised me: 3 Pieces for piano, Op.11 ; 6 Little pieces for piano, Op.19. More work for me to do but I think this may be the way into Schoenberg’s world for me. I still could hear a tonal thread but with enough variety and drama to draw me in.

As for the Beethoven well the stand out in the Op 13 “Pathetique” was the Adagio slow movement (mind you anything chorale like is bound to work for a simpleton like me) and I got a bit lost in the final Rondo but that was probably my fault for not concentrating enough. But after the interval the two movement Op.78 “à Thérèse” (I gather the F sharp major key here is the reason this sounds a bit different) and the Op.57 “Appassionata” (where Beethoven delights in exploiting leaps in piano technology) were simply wonderful.

To me Mr Pollini seems to be a little freer in his interpretations compared to the recordings. Mind you those recordings apparently span much of the career of an artist who has been at it for seven decades now. Imagine that. Going to work every day for nearly 60 years trying to get better at what you do whilst giving pleasure to everyone around you. That is “sticking it to the man”. (Indeed I gather Mr Pollini did indeed pursue a more classically politically engaged stance in the 1960s and 1970s making even more of a hero in my book).

Anyway this was just about perfect – I had the thing that I like about concerts when it works where you are just completely immersed in the music. Seemed to me that was shared by the audience (though there was some ar*e trying to record the Schoenberg on their phone until they were told off – I shall return to this subject in later posts but for me this is a bloody outrage).

So here’s the deal. This blog is generally aimed at the culturally curious armed with only a tiny bit of knowledge. For those who know they like or think they might like Beethoven and want to delve into the piano sonatas then this would have been no better way to start. For just a tenner (assuming you are prepared to compromise a bit on the sound at the back of the stalls and don’t mind not seeing the maestro’s hands at work) you can hear this music played by this man who surely ranks as one of the greatest living pianists.

Of course that is no use now it has been and gone but I highly recommend looking out for the great man’s return next year (March 2018). If Beethoven appears just grab a ticket or two.

And while you are at it treat yourself to the complete recordings of the Beethoven sonatas. it took a bit of time I gather for Mr Pollini to record everything but there they are – for £33 on Amazon you get 8 discs (don’t talk to me about downloads – I don’t understand why you wouldn’t want to own physical copies of this music). Get these and decent complete sets of the symphonies and the strong quartets and you will be well on the way to immersing yourself in probably the greatest music every written (the Fall excepted).