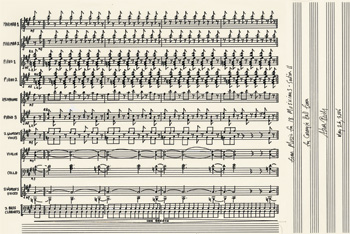 Now it is a racing certainty that you will be familiar one way or another with the great minimalist composers of the second half of the C20 even if you don’t know it. The sound is ubiquitous in film, television and elsewhere. Driven by clear rhythms and patterns, with simple sonorities and slow harmonic progression, and with loads of repetition, this is a breeze for the punter (like me) born and bred in a pop/rock/soul paradigm.This is why it is justifiably quite “popular” and is bringing in a load of bearded youth into concert halls (a good thing with some minor exceptions).

From this base I have put some effort in and in the last couple of years have expanded exponentially into the minimalist world. The Minimalist series in 2015 at King Place was very helpful (big respect to Kings Place and the way they pull these series together) and I have seen a fair chunk of the major pieces performed in London since then and bought a lot of CDs to boot. So no expert but unlike many things I see I think I have a bit of a jump on most here.

But whisper this. There are times when the repetition can spill over into the plain dull. Fortunately this evening was not one of them.

Gavin Bryars “post-minimalism”, at least in the context of two of his most well known pieces played here, does ask a bit of the listener though to avoid falling into the dull trap. The “Sinking of the Titanic” takes some tape snippets and then sets a score based on what may have been played by the ship’s band as she went down. The lines are long, the harmonies shift slowly and it does go on a bit but overall the “underwater” effect and the varying of the instrumentation was enough to keep me going.

The second Bryars piece I have heard more often. This is Jesus’ Blood Never Failed Me Yet. The tape loop of the tuneful tramp singing will burrow into your brain. However here the slow but palpable building up of the orchestration on top of this makes it easier to follow for a ninny like me. It reminds me a bit of another fave of minimalism for me, Arvo Part’s Cantus in Memoriam Benjamin Britten. Remember all this is my impression, please don’t shout at me if musically this descriptions or comparisons are nonsense.

Then we had arguably Steve’s Reich’s most famous work, Music for 18 Musicians. I own a couple of recordings of this (how fancy is that) and have seen a few performances. This helps as I can now follow the joins (announced by the fella on the mettalaphone no less) so can hear each of the parts in a way I couldn’t at first. But with the rhythm provided by the percussion instruments (love it when the maracas come in – hard work for the players I guess to do that much shaking in one night), and the pianos I defy anyone listening to this not to be drawn in and get the “minimalist trance” thing kicking in.

I can’t put my finger on why but this was the best live performance I can remember of the piece or maybe familiarity is a virtue here. Or most likely the LPO musicians just had a blinder. Anyway I highly recommend anyone taken by this to delve further into this world.

For Steve Reich I recommend the Desert Music and Drumming on top of this pieces, for Philip Glass maybe Glassworks to start(there is an awful lot of Philip Glass music as I am finding out the hard way), for John Adams I think Shaker Loops and Short Ride in a Fast Machine and I would also put a shout in for Michael Nyman’s string quartets and film music. There are tons of compilations (look away now classical music cognoscenti) to get you going.  Oh and you need the grandaddy of them all In C by Terry Riley. I will deal with the “holy’ Minimalists and especially Arvo Part another day.

Anyway all up I genuinely think your life will be a lot better listening to some of this especially for you youngsters who are steeped in rhythm anyway. So get that YouTube working.