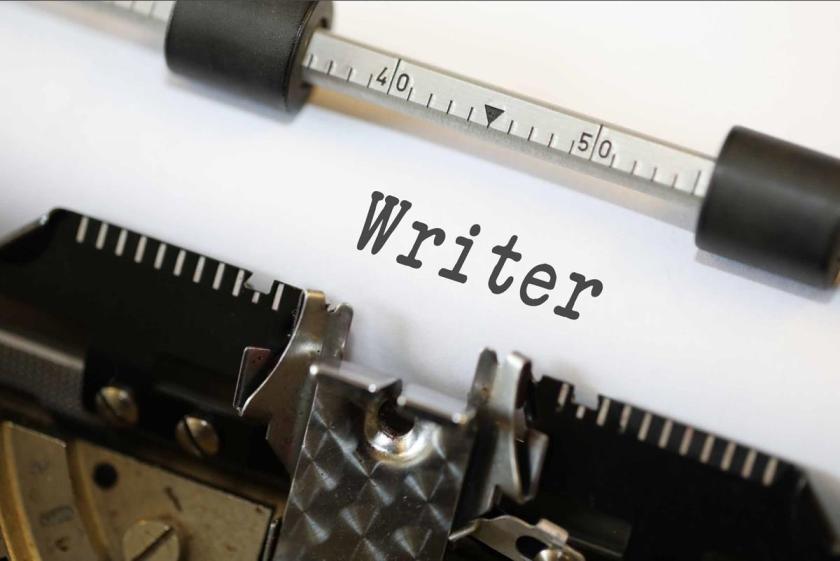 The Writer is …. an absolutely staggering piece of …. writing. No other way to say it. I’d wager there were a few punters in the audience that disagree with me but I think Ella Hickson, along with director Blanche McIntyre and the rest of the creative team, and an outstanding cast, have conjured up a masterpiece. In the same breath it provokes, educates and entertains. It deserves a much wider audience that the well-heeled punters like the Tourist who make up the Almeida throng. Whilst the Almeida may not immediately struck you as part of the solution to the problem of access for telling stories from women on stage, it was heartening to see this project realised there.

It starts with an impellent Lara Rossi, (who is more than a match for Romola Garai, superb as the eponymous Writer), playing a young actor/writer who, post performance, eloquently demolishes the lazy, sexist premises on which a complacent Samuel West’s direction is constructed. As she says theatre is “famous people, doing boring things badly”! Men are judged on what they produce, women on how fuckable they are. They have inevitably met before. We discover though that they are acting out the Writer’s text and sharply shift to a staged Q&A in which the nervous, tongue-tied Writer’s work is undermined by the “real” Director imperiously played by Michael Gould who praises its “promise” but inveigles against it lack of “structure”. Just who is going to watch this sort of stuff?

Scene two switches to the home of the Writer and partner, also Samuel West, who bullies and cajoles the Writer into agreeing to adapting her work into a film. It is all about him. She yearns for, and needs, more. The “biological clock” is invoked. The next, I think deliberately disorientating and galling, scene sees the Writer in a safe, supportive female only space, a jungle-y retreat of sorts, invoking Semele and other Origin mythological mumbo-jumbo (with some fantastic realisation from Richard Howell’s lighting, Emma Laxton’s sound and Zakk Hein’s video). Scene four sees the now confident Writer arguing with Michael Gould’s director about the play to date. He is viciously pulling the prior scene apart, whilst patronisingly banging on about the “rawness” of the opening. The final scene sees the writer with another partner, this time played by Lara Rossi. The compromises and imbalances of scene two are revisited.

From this structure Ella Hickson is able to explore fundamental arguments about how power, the patriarchy and contemporary capitalism, (as Lara Rossi’s character explains early on), affects, and infects, the creative process, art and the theatre and our relationships. It is a polemic of sorts, but Ms Hickson dissects her material, with fearless, supple and sceptical self-awareness. It confronts and confounds the audience, for sure, is intellectually reflexive, but avoids aggressive predictable dialectic. It revels in, and reveals, the artifice of theatre. Which in some ways makes Romola Garai’s performance, remember she has to convincingly “act” this all out, even more remarkable.

If thats sounds like a recipe for a dry evening, think again. The “drama” is delivered with real passion, even anger, with wit, and with a formal inventiveness, that left the Tourist with bum glued to his seat, ears straining, mouth open. Anna Fleischle’s design, (and the on-stage managers), intelligently accommodate the play’s inversions with repeated construction and de-construction. Ultimately though it is the control that Ella Hickson exerts over her themes, assisted by Blanche McIntyre, that makes this brilliant. It twists and turns but it knows exactly what it is doing and saying.

I learnt a lot. I recognise the behaviours exhibited by the men on stage here, especially Samuel West in the second scene. I don’t know how to avoid them. I do know I had to think very hard about what I would say about the play. It will make you want to argue. Ideally not while it is going on although maybe we should.

At one point, forgive me I forget when, the point is made that the Writer will move on to more established theatrical storytelling forms. Presumably this will be so for Ms Hickson thought I doubt she will write anything as powerful as this story about the struggle to tell women’s stories. Mind you Oil was a work of near genius in my book and also shows she isn’t going to fuck about with little subjects. I think she might just be the best and most challenging writer for the British stage right now. Ignore those who will say this is just irritating, indulgent self-therapy. They are wrong. Leave them to watch nonsense like that revival of Absolute Hell or Rattigan knock-offs. This is what theatre is all about. 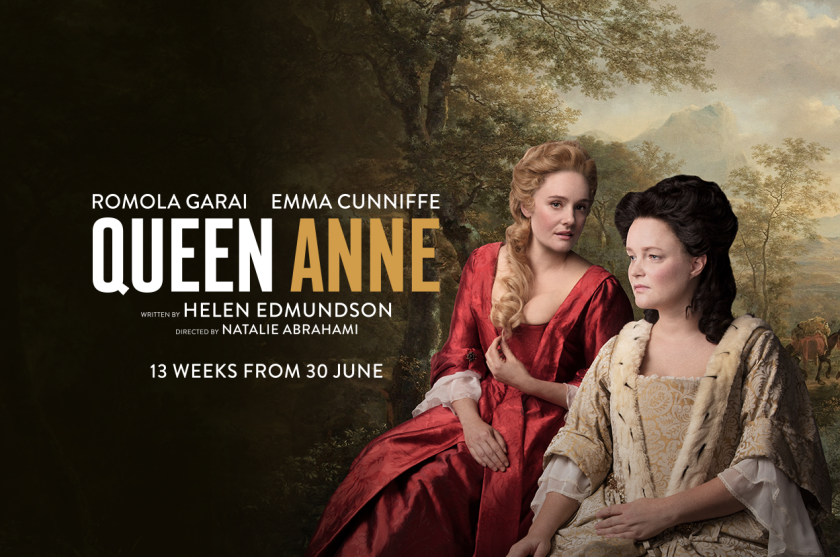 Tricky customers history plays. How to introduce the characters and explain events without slackening the dramatic pace. It’s OK if your Will Shakespeare. He wrote the history. Or at least someone before him wrote something, which he then purloined and turned it into a great work of art with those words, oh those beautiful words. And ever since people have half-believed his stories were based on solid facts. Mind you historical “facts” are a slippery business anyway. Always shaped by the narrator. I’m with the master of wry Alan Bennett: “History is just one f*cking thing after another”. A quote he stole in any event from a distinguished academic, though no-one seems sure which prof. said it first. See what I mean.

Anyway the writer of Queen Anne, Helen Edmundson opts for the direct approach to exposition with characters bluntly announcing their identity and, when necessary, the unfolding key events. This ensures that we the audience can follow the action without the need for intensive background reading but it does mean the first third of the play feels a little disjointed. However once the dramatis personae are established and the various themes laid out we then get a fine story simply told under the direction of Natalie Abrahami.

The focus of the play is the relationship between Queen Anne (Emma Cunniffe) and Sarah Churchill, Duchess of Marlborough (Romola Garai). Anne accedes to the throne on the death of her childless brother in law William III (played in barking king mode by Dave Fishley). You know he was the Dutch fella we invited over with wife Mary to keep the Catholics off the throne. He landed at Brixham, also famous as the birthplace of the Tourist. Hurrah. Here he is. Unusually without a seagull crapping on his head. 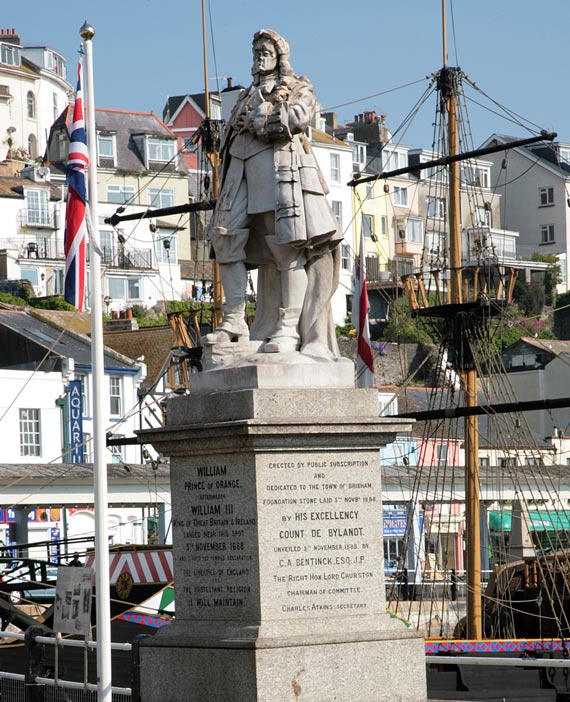 Anyway Anne is a Stuart but the right sort as a Protestant. She is also childless despite seventeen pregnancies, a very sorry state of affairs. Her husband, Prince George of Denmark (Hywel Morgan) is a full on booby. Anne is, initially at least, physically and temperamentally, not really up to the job, so her childhood friend Lady Sarah and her circle of Whigs do their best to manipulate her to their own ends. Our Lady Sarah just happens to be the wife of John Churchill, whose rise to become leader of the Protestant forces across Europe in the War of the Spanish Succession against mighty France and Spain, (after a few false starts), brings recognition, wealth and prestige. This was a turbulent time in English (and with the Act of Union in 1707, British) politics and the play does an excellent job in drawing this out, as Anne seeks to make her mark and shifts allegiances towards the Tories led by Speaker Robert Harley (very well played by James Garnon). This was the era when Britain moved into the first division of European powers (though war proved an expensive business) as the Catholic powers were faced down and as capital was accumulated largely on the back of the slave trade (yes all you proud Brexiteers, these are the foundations your glorious country is built upon).

The tempestuous Lady Sarah gets the hump as her influence on Anne dissipates and gets properly jealous of Abigail Hill (played by Beth Park) another scheming ingenue who comes from nothing to become the Queen’s new bosom buddy. Sarah leaks some salacious correspondence but this backfires and she, her husband and her circle are debilitated (though the family has seemed to rub along ever since down the centuries – go see Bleinhem Palace is you don’t believe me).

These events are interspersed with some entertaining song and dance routines. This was after all the period which saw the rise of the popular press, in the form of pamphlets, and the emergence of political satire. The great British public, OK the emergent newly rich grasping oligarch Whigs (land alone no longer being the route to power), had put the monarchy back in its box and weren’t above any ruse to slap down the Tories, high Church and sniff out any whiff of Jacobitism.

So a fascinating time, an important monarch who ruled at a pivotal period in England’s history, and a well realised portrait of an intense relationship. Emma Cunniffe and Romola Garai both give very credible performances as Anne and Sarah and there is real passion in parts of the second half. But this is no Mary Stuart and there were times when I was hoping for a few more twists and turns. On the other hand if this is the sort of thing that floats your boat, and on balance I would say it should, then I see there are plenty of tickets left at very attractive prices, so give it a whirl.