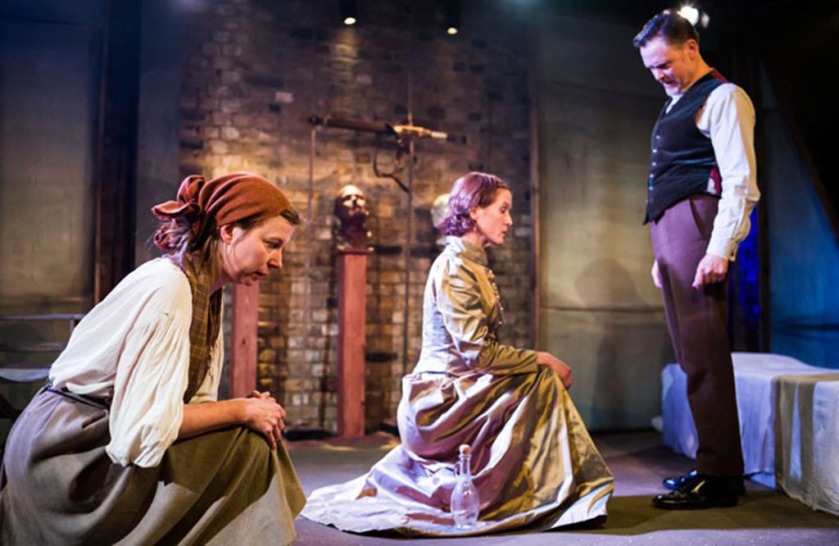 Judith: A Parting from the Body

I am guessing they don’t watch Bake-Off in the Barker household.

Howard Barker does not write easy plays. By his own admission he wants each of us to experience his plays as an individual: none of that namby-pamby rush of joy in the realisation that we are all sharing in the theatrical experience. His “Theatre of Catastrophe” will always try to make themes more complex and ambiguous. He has created his own company, The Wrestling School, to produce his work in Britain. Obviously he is adored in the rest of Europe where there like a challenge. Oh and he doesn’t backslide on the subjects for his plays, taking historical or literary stepping off points to create works with multiple viewpoints which explore the darker side of the human condition. Mischief Theatre it ain’t.

Judith: A Parting from the Body was originally produced by RENO Productions at the Arcola in 2015 as part of a double bill with the premiere of The Twelfth Battle of Isonzo. This is the same cast but just a workout for Judith which clocked in at an hour or so. Now you arty types will know the Old Testament story of Judith beheading Holofernes like the back of your hand. It was a Renaissance and Baroque art staple based on a story which I understand is itself a common subject in the so called Power of Women topos, “heroic or wise men dominated by women”. Through time the depiction of Judith became more sexualised and titillating. On the face of it antifeminist claptrap but there may be scope for more complex readings and this is what Mr Barker succeeds in doing with his play.

Liam Smith as general Holofernes expounds on the nature of power and sacrifice demanded by war. But his philosophising gives way to loneliness and vulnerability. Judith, a beautiful widow played by Catherine Cusack, with her plebian maid (Kristin Hutchinson), enters the enemy Assyrian camp on the eve of the battle and gets to his tent. There is much enigmatic chat and sexual frisson  between the three before Judith does the deed to save her city of Bethulia. Yet Judith and the maid become fascinated with Holofernes and his motives and Judith’s emotions become conflicted.

Now I am not saying this was an comfortable night out. Mr Barker is not interested in simply getting us from A to B in the standard way. The language veers abruptly between mellifluous poetry to profane banality. These characters are full of contradiction. Love and violence are intertwined. Nothing is made easy to grasp. I can’t pretend I was bowled over but it was intriguing and as I whizzed through the script on the way home, I started to get more out of it. I will add Mr Barker to my list of challenging playwrights where I must do more work.

The three strong cast were faultless, they know this inside out. Same was true of director Robyn Winfield-Smith and the set of Rosanna Vize was perfectly imagined. The small space at the Arcola was also a perfect fit. So no better advocates than these I think. Yet is is still a hardcore offering. So if you fancy a bit of dramatic pummelling take the plunge. I see the production is off to Poole and Colchester.